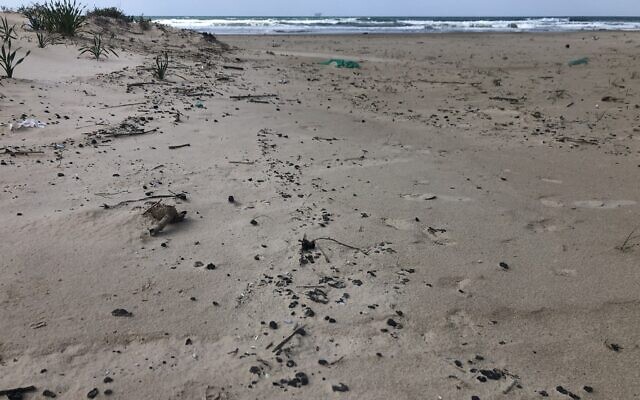 Knesset committee chair warns that in a future pollution disaster, ‘we won’t have water to drink and our children won’t be able to bathe in the sea for decades’

As volunteers continue to clean tar from Israel’s Mediterranean coastline following an apparent oil spill at sea just under two weeks ago, nature — it seems — has other plans.

Because the tar just keeps coming.

The Environmental Protection Ministry has color-ranked beaches from Rosh Hanikra in the north down to Nitzanim in the south according to the severity of the contamination. According to a “traffic light map” (in Hebrew) that is updated every day, blue denotes very light pollution, while dark red, the most severe, means medium to heavy tar spill.

On Tuesday, this reporter visited two beaches in northern Israel: Maayan Zvi (dark red on Monday night), west of Zichron Yaakov, and the Gador Nature Reserve, just over a half hour drive to the south, which was yellow (mild).

The sand on both beaches was still flecked with tar balls.

At Gador, where soldiers from the army’s special intelligence unit 9900 were volunteering for the day, shiny new chunks of tar lay close to the waterline and previously deposited flotsam were still tucked onto the nooks and crannies of the cliff.

“It’s great to get away from the computer screen and to be out on such a lovely day,” said Samuel. “It’s also great to be able to help,” added Hadar.