International
Flooding along the Clontarf seafront in 2012. Photograph: Alan Betson 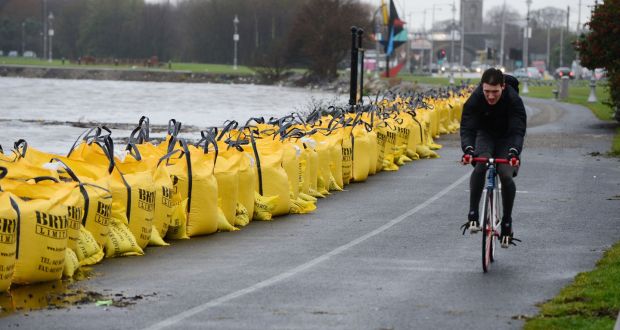 IR - Drowning Dublin: can the capital keep its head above water?

Flooding is prime climate change risk for the city with up to 20,000 buildings at risk

With 52km of coastline, three major rivers, and a city centre largely reclaimed from the sea, flooding is the most significant climate change risk facing Dublin.

Sea levels are projected to rise by 3-4mm a year internationally, in Dublin Bay they have already risen by 6-7mm annually in the last 20 years. Wave heights, the frequency of coastal storms and extreme rainfall events are also increasing, leaving many Dublin households in a vulnerable position.

When Hurricane Charley hit in 1986, with 200mm of rainfall in a single day coupled with extreme tides, it was seen by many as a once-in-a-lifetime event. At the time, there had not been flooding as bad in the capital for 100 years.

From 1986 to 2000, there were very few recorded incidents of significant flooding in Dublin, and Charley began to look like something of a freak. However, as the century turned, what had appeared to be aberrant weather began occurring with increasing regularity.

“In 2002, there was a tidal event with more than 1,100 buildings flooded. Before 2002 we didn’t really know we had a problem with tidal flooding because the previous big event had been in 1922,” O’Connell says.

In the autumn of 2008 came another a once-in-a-century rainfall event, this time concentrated on the north of the city, with 19 areas experiencing severe flooding, many of which had no previous history of floods.

Almost a year later there was more extreme rainfall. This was a once-in-50-years event, again largely affecting the north city, both in coastal area such as Clontarf and also inland in Cabra and Finglas. Sandymount, on the southside, was also hit by this flood.

Then in 2011 came the worst flooding since 2002. There was more extreme rainfall, rivers broke their banks and 1,250 buildings were flooded in the city. In the decade since, severe storms, record tides and intense rainfall episodes or “extreme weather events” have all become regular occurrences.

“Between 2000 and 2018 there was 150mm of sea level rise recorded – that’s as much as in the last century in less than 20 years. And it’s not just static sea-level rise – as the water gets deeper waves get higher for the same strong winds,” O’Connell says.