International
A seagull is seen near the Rialto Bridge over the Grand Canal in Venice, Italy on Wednesday as the country remains locked down amid the coronavirus crisis. AFP 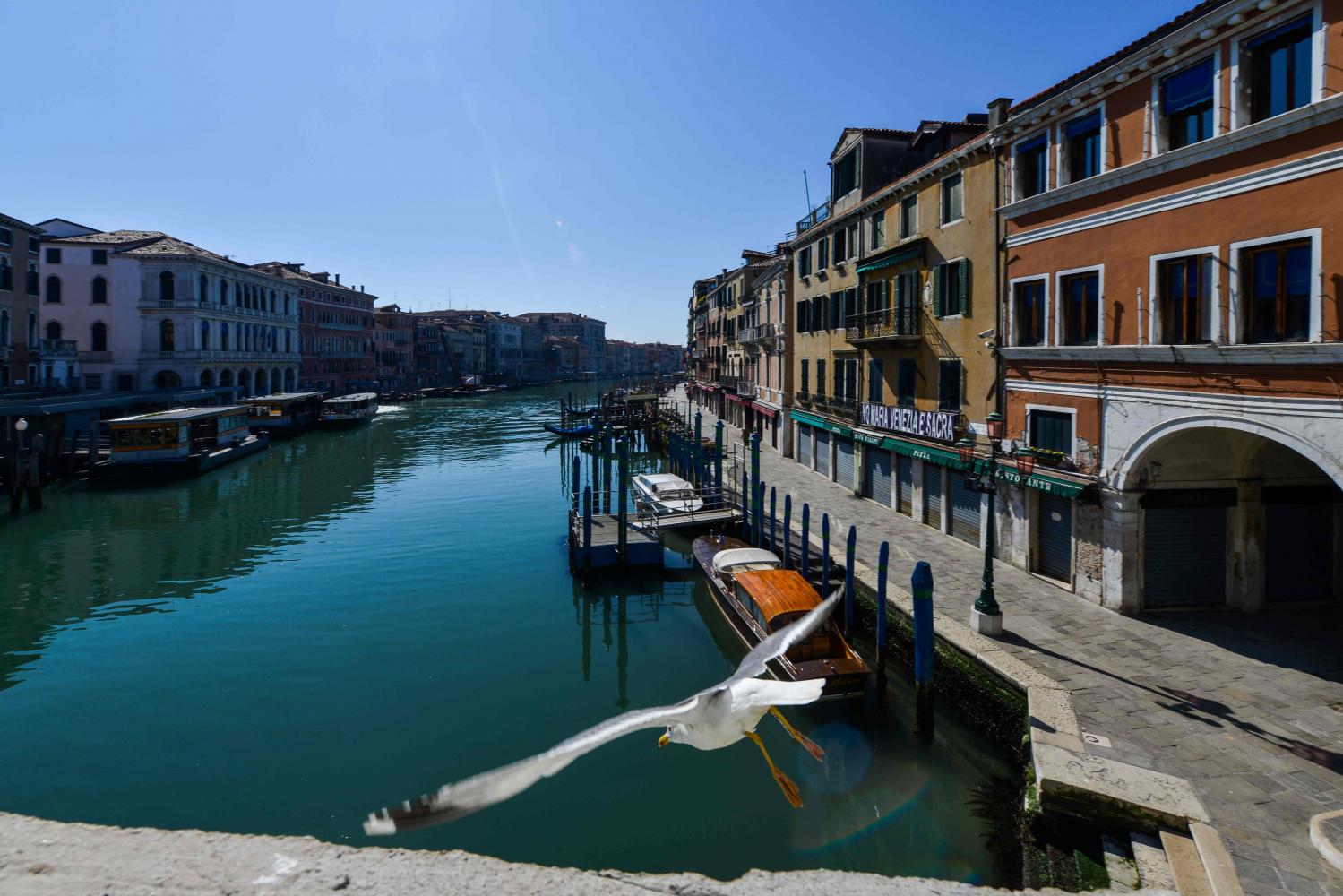 Int'l - Waiting for disasters is a risky game

They say every cloud has a silver lining. So, does the pandemic that is wreaking havoc across the globe have one too? Unimaginably as it may seem, it does.

The lockdown taking place in many countries has evidently caused tremendous hardship on their populations, not to mention a severe impact on their economies.

But in Italy, which has now overtaken China in terms of virus fatalities, what may be characterised as a small miracle is taking place.

Some residents in Venice have taken to social media to share their surprise at seeing water in their famous canals become clear again after days of inactivity from boat traffic. Fish can be seen swimming again, a marvel truly.

Meanwhile, a video showing dolphins frolicking in the water near the coastal city of Cagliari has gone viral as ship traffic has come to a halt.

A study by the European Space Agency also reported that air pollution over northern Italy has fallen after lockdown.

It's not just Italy that is seeing a drop in emissions. Research by Finland's Centre for Research on Energy and Clean Air shows that CO2 emissions in China fell by 200 million tonnes during the month of February.

Other aspects of recovery have occurred as well. I'm sure that popular attractions in Thailand, such as the Grand Palace, beaches, islands, and waterfalls, must look very different now than they did a few months ago.

Not only are there fewer people and cars, but there is less rubbish being strewn around also. The air has become fresher and there is more peace and quiet.

All this has come about within a short time of world governments reacting to the pandemic.

The lockdown now in place in many European countries looks likely to expand to other parts of the globe as more people become infected.

This may turn out to be one of the most significant experiments by necessity ever taken in history about how the human race survives in a war by an army of unseen enemies.

Policymakers and economists are already counting the costs as a result of reduced economic activity and government assistance to vulnerable segments of society.

Our normal way of life has not just been disrupted but upended as changes must be made to almost every facet of daily life and work. Work-from-home and online teaching have become normalised in our vocabulary and social distancing and non-touch greetings are also becoming the norm at least for the duration of the pandemic.

But the most significant development is the boon to the environment. This will become more evident as the lockdown progresses.

So far, air traffic has dropped by half and land and water traffic has also fallen significantly as people are advised to stay home and only venture out when necessary.

The price of oil has taken a dive as demand plunges and the consequence of this is clear; there will be much lower CO2 emissions across the globe.

We are seeing such developments in a short period following the world's reaction to the infection. Governments have been saying that the lockdown or drastic containment measures will be in effect for at least 14 days.

The reality is that nobody knows how long these necessary measures will be needed -- they could last months as they did in Wuhan.

But Wuhan survived and China survived. If countries have to go into a lockdown en masse, the world will most likely survive as well.

Of course, the economic costs will be humongous as will the hardships for a lot of people. But it is a cost worth paying for the survival of the global community.

One thing this global action demonstrates is that the world community is capable of dealing with a crisis of unimaginable proportion.

Imagine, then, if the world community was able to put its mind together to face the crisis of climate change, a crisis which is even more unimaginable because it could mean the end of civilisation as we know it.

We now have an indisputable example of the scale of damage that can happen if much-needed reaction to a crisis is delayed. Each day that action is not taken means more environmental damage and greater loss of life.

To get through the Covid-19 crisis, governments around the world have resorted to extreme measures and in the process upended the normal way of life.

The human cost of climate change may have yet to be felt unlike the ravaging virus but scientists have repeatedly warned that once the symptoms of climate change reach the tipping point, the damage will not only be devastating but long-lasting and not readily reversible.

What we need is nothing less than a paradigm shift in our economic system. We should not have to rely solely on the destruction of natural resources to maintain growth.

Infinite economic growth as we know it is neither possible nor healthy. We need a more balanced model of development. It might mean a less comfortable lifestyle but it doesn't necessarily mean we have to go back to the stone age.

A cogent lesson from the Covid-19 pandemic is that we should not wait for a catastrophe to strike before taking necessary action, as by that it could be too little too late.