International
Titanic's bow section with the yellow arrow indicating the area of the Marconi cabin - all images from the 2020 Research Design filed with the U.S. District Court 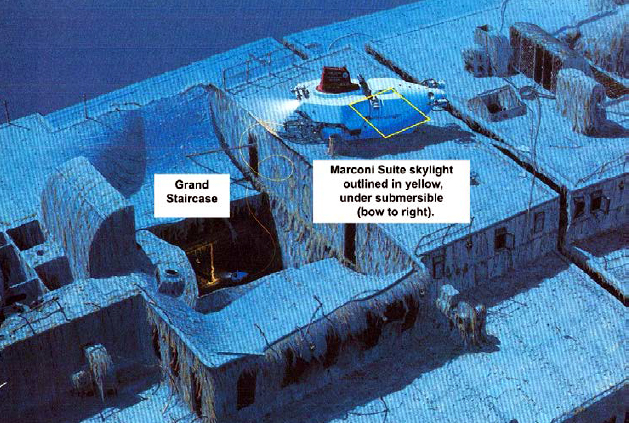 The next installment in the 100-plus year drama around the Titanic is about to play out in a Virginia courtroom. RMS Titanic, which holds the rights to the wreck site, was due by June 18, 2020, to file a financing plan for the recovery and conservation of artifacts it is targeting during its 2020 expedition to the wreck. In addition, RMS Titanic also has to respond to a challenge from the National Oceanic and Atmospheric Administration (NOAA) to its plan to enter the ship to recover parts of the famed Marconi wireless.

The U.S. Department of Justice on behalf of NOAA filed a motion with the U.S. District Court in Norfolk, Virginia seeking to intervene in the current court case, asking the court to stop RMS Titanic from conducting “any research, exploration, salvage, or other activity that would physically alter or disturb the wreck or wreck site of the RMS Titanic.” The U.S. is also asking for an extension on the time to file an appeal to the court’s May 20, 2020 ruling that would permit the expedition to proceed subject to the financing plan. The court has been overseeing the expeditions and artifact recovery, but in 2000 forbid cutting into or detaching any part of the wreck.

At issue is far more than just the plan to recover parts of the Marconi equipment, but also a larger dispute over the laws governing oversight of the wreck and potentially other sensitive sites. NOAA claims that RMS Titanic requires authorization from the Secretary of Commerce under the provision of the International Titanic Agreement under which the United States and the United Kingdom regulate activity at the wreck site “so that the hull, other artifacts, and human remains are not disturbed.”

RMS Titanic says that it regrets that its relationship with NOAA has become increasingly adversarial, but it believes that NOAA is overreaching and attempting to expand the standards that apply to its activities. In its legal filing, RMS Titanic contends, “This Court – and only this Court – has the Constitutional jurisdiction to provide oversight.”

This latest dispute stems from the company’s efforts to modify the court’s 2000 order that prevented the 2020 expedition’s goal of recovering the Marconi equipment. RMS Titanic petitioned the court saying that these “vital artifacts” were in severe danger due to the ongoing decay and collapse of the structure. They illustrated changes to the structure of the ship due to the living organisms, ocean currents, and collapse in adjoining areas of the ship.