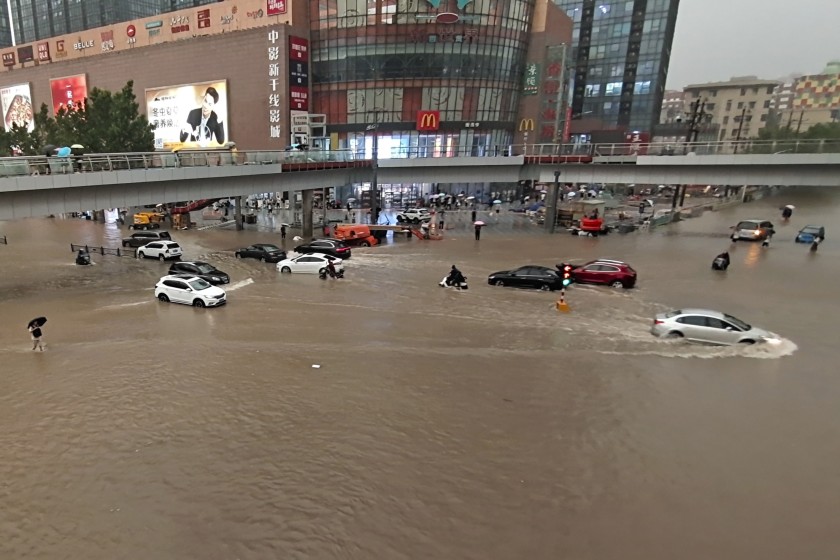 BEIJING — Torrents of murky brown water gushed past the train window, flowing fast through the subway tunnel. Inside, passengers stood on top of seats, clutching their phones overhead as the muddy tide rose past their chests. Some gasped for air. Others sent desperate last messages to family members, telling them their bank card passcodes and saying goodbye.

“The water outside has already come this high,” one frightened woman said, reaching out to the subway car door in a video that spread quickly online. “My phone is almost dead. I don’t know if this is my last WeChat message.”

The woman, one of some 500 people trapped on a subway amid catastrophic flooding Tuesday night in Zhengzhou, in China’s Henan province, reportedly survived. A dozen people did not.

The scenes of desperation and devastation in Zhengzhou added to a portfolio of disasters this year that have raised the specter of irreversible climate change as never before and offered glimpses of what it means to live on a warming planet where human survival grows more fraught.

Extreme weather this summer has flattened rural communities in Germany with floodwaters, triggered deadly mudslides in India and sparked heat waves and fires that can be seen from space in the Western United States and Canada. Floods have also wrought damage in parts of New Zealand, Nigeria and Iran.

Scientists have been warning for years that rising temperatures will make dry conditions for wildfires more common in some parts of the world and, in other places, trap more moisture in the atmosphere, leading to heavier rainfalls during storms.

Those conditions could cause more volatile events like the downpour over London on July 12, when about a month’s worth of rain fell on parts of the British capital, leading to flash floods that paralyzed some streets and forced the partial closure of its Underground rail system.

More unprecedented heat waves also could be in store, like those experienced this month in the Pacific Northwest, where hundreds of people are believed to have died from the extreme temperatures, and Russia’s Siberia, where nearly 200 separate forest fires have choked the region in smoke that has since drifted to Alaska.

“All of this was predicted in climate science decades ago,” said John P. Holdren, a professor of environmental policy at Harvard’s John F. Kennedy School of Government. “We only had to wait for the actual emergence in the last 15 to 20 years. Everything we worried about is happening, and it’s all happening at the high end of projections, even faster than the previous most pessimistic estimates.”

Scientists and environmental activists are in a race to persuade the world to reduce greenhouse gas emissions by enough to prevent global temperatures from rising more than 2.7 degrees Fahrenheit (1.5 degrees Celsius) above pre-industrial levels. Failure to do so could result in massive disruptions such as famine and widespread coastal flooding. Time is short: Global temperatures have already risen on average by 2.16 degrees Fahrenheit (1.2 degrees Celsius) since 1880.

Last week, the European Union proposed sweeping legislation aimed at cutting emissions by more than half of 1990 levels by 2030 through the phasing out of gasoline and diesel cars and the imposition of tariffs on imports from polluting countries. The plan poses formidable challenges for the 27-country bloc, including trade tensions and a political backlash from those who deny climate change is happening.