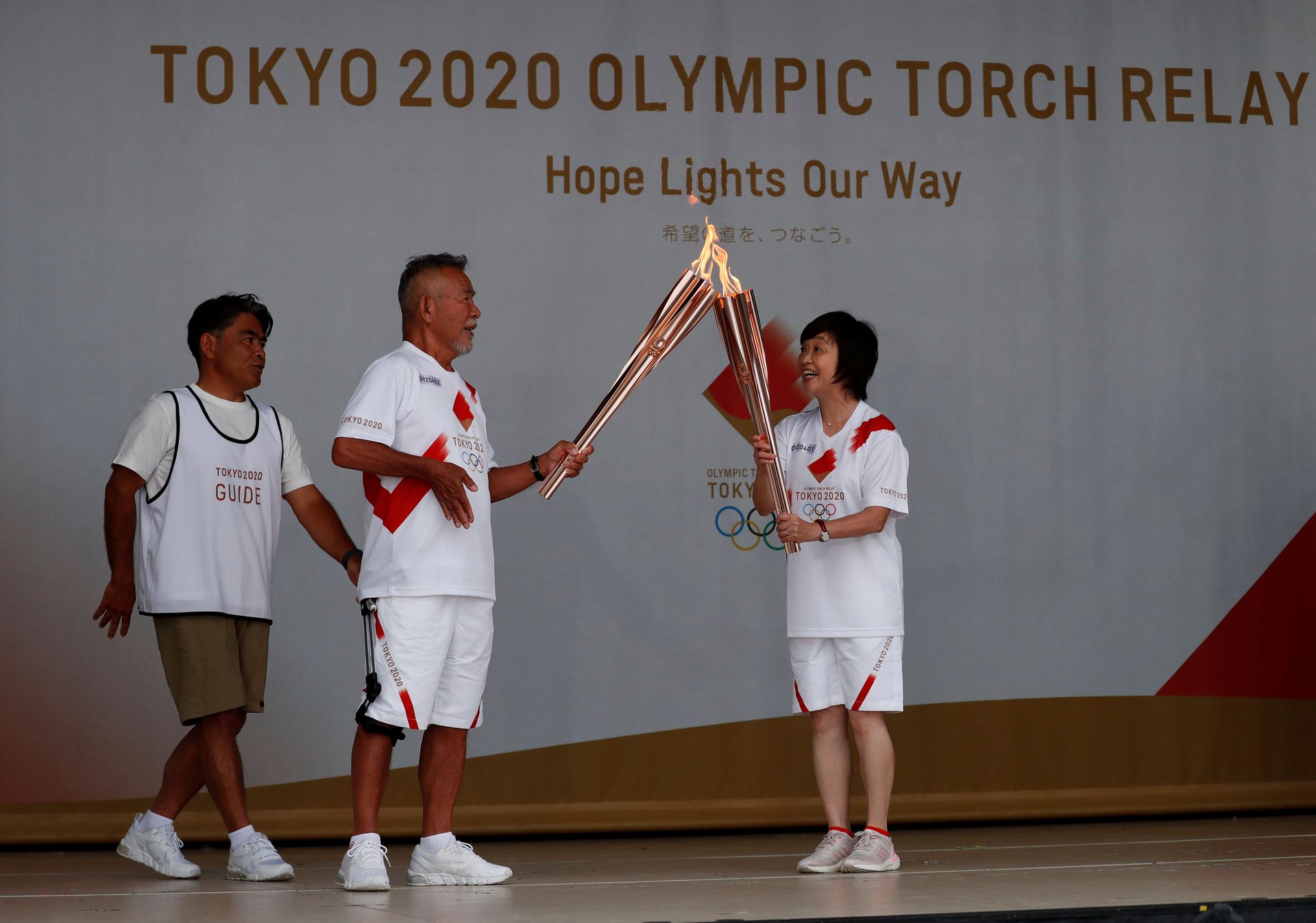 Int'l - Special Report: Wipeout of an Olympic dream for a godfather of Japanese surfing

July 20, ISUMI, Japan (Reuters) - Whenever Teruo Adegawa arrives at Taito Beach, other surfers recognize him right away. Dressed in a Hawaiian shirt and shorts, the 78-year-old steps out of his car, leaving his walking stick by the passenger seat.

He tells Adegawa, or "Ted san" to everyone here, how he heard about the Olympic torch relay getting canceled – the latest in a long line of headaches for the Games in a year still haunted by the pandemic.

"It's a real shame," Horimoto says. "You were training so hard."

"Yeah, it's so frustrating," says Adegawa, who had been chosen to be a torchbearer.

Adegawa, renowned in Japan as one of the nation's surfing pioneers, had a debilitating stroke 18 years ago. Surfing is making its debut as a sport in the Summer Games this year, and Adegawa had spent the past year slowly running the length of the beach every morning so he could take part in the Olympic relay along this stretch of coastline southeast of Tokyo – which he helped build into a surfing destination.

He tells Horimoto he wanted the kids in the area to see the relay, maybe inspire some of them to take up surfing. He didn't expect organizers to cancel the whole relay, thinking it was fine to have the event outside with spectators spaced out along the route, even with COVID-19 still a risk.

Instead, the relay was canceled and Adegawa attended a muted ceremony on a makeshift stage far from his town at the beginning of July. Under a leaden sky in front of a sparse crowd of other torch bearers, Adegawa was handed the Olympic flame for just over a minute before he was rushed off stage.

Ichinomiya, just down the road from Isumi, is about to host the Games' inaugural surfing competition. But there are few signs of the event. The venue itself is obscured behind a mile-long steel wall, barred by a white gate with uniformed guards.

With just a few days to go until the opening ceremony, Japan is trudging toward an unprecedented Olympic Games, held under the shadow of a global pandemic.

Far from the Olympic ideal of bringing people together, the run-up to the Games has been marked by events hidden from public view. Now, spectators are barred from most Olympic events, including the surfing competition.

The Japanese public, the majority of whom have long opposed hosting the Games during a pandemic, now faces a truly surreal prospect: cheering for the world's largest sporting event from home while the largely unvaccinated country remains under virus restrictions that prohibit them from gathering, drinking or traveling.

In the decade since Japan was selected to host the 2020 Olympics, the event has been dogged by a near-constant churn of scandal: first corruption allegations, then budget overruns, an unprecedented one-year delay because of the pandemic and, more recently, an exit of the country's top Games official over sexist remarks. Yoshiro Mori, the former head of the Tokyo 2020 organizing committee, retracted and apologized for his remarks in February and quit his post.

Even now, there is daily speculation about how the event could spread infections. Organizers point out that they've published guidelines and issued rulebooks that they say will prevent infections.

Shortly after meeting with Japan's prime minister this month, Thomas Bach, the head of the International Olympic Committee, assured reporters there was "zero" risk of Olympic participants infecting Japanese residents with the coronavirus during the Games.

Once so excited for the celebration, Adegawa and his sleepy surf town capture both the yearning and disappointment that characterize this year's Games.

Adegawa waves in the direction of the walls that block a stretch of the beach. "Hey, can anyone get behind those?" he asks Horimoto. He'd already tried once to get inside but was politely turned away.

"I dunno," Horimoto says. Honestly, he's not all that interested in the Olympics.

"But the Olympics are never, ever going to happen here again, right?" Adegawa interrupts. "I just really want to see it with my own eyes."

A SURFER IS BORN, FAR FROM HOME

Born to an entrepreneurial family in Tokyo that designed and sold neckties for salarymen, Adegawa didn't learn to surf until 1964, in his early 20s. Tokyo was hosting its last Olympic Games that year, and the whole world was paying attention, Adegawa says.

Laying out dozens of old photographs on his living room coffee table, Adegawa recalls how he traveled to California as a college junior with almost no money and only vague ideas of what the U.S. would be like.

In Santa Monica, he saw young men in colorful shorts carrying surfboards instead of briefcases, wearing tie-dyed shirts instead of suits. He was hooked even before he caught his first wave.