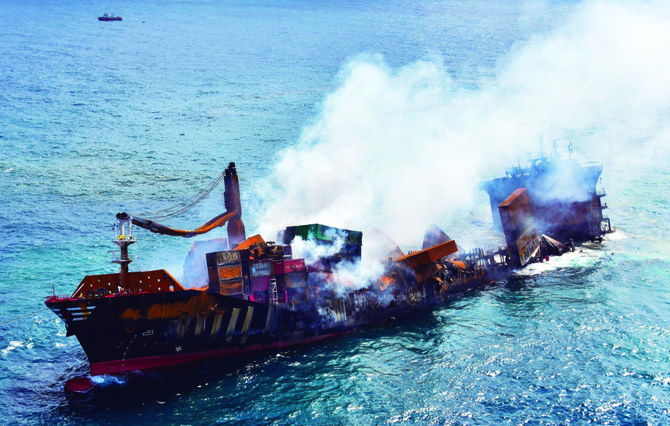 ‍
COLOMBO: Experts on Wednesday warned that a stricken container ship that caught fire 13 days ago off Sri Lanka causing one of the worst ecological disasters in the country’s history could now create an oil spill crisis.

Rescue teams have been working around the clock to tackle the blaze on the cargo vessel which was carrying hundreds of tons of chemicals and microplastic.

‍
Locals living along the coastal belt have been advised not to eat fish from the waters until further notice, with a temporary ban in place since last week.

‍
Douglas Devananda, Sri Lanka’s minister of fisheries and aquatic resources development, told Arab News: “We have advised fishermen in these areas not to go fishing as the people cannot eat the fish in the affected areas.”

‍
A massive cleanup operation involving thousands of troops and Sri Lankan navy personnel continued on Wednesday as workers removed debris from beaches near the capital Colombo, including in the popular tourist spot of Negombo.

‍
Other areas worst affected included Panadura, Moratuwa, Mt. Lavinia, and Hendala along 80 kilometers of coastline. The region is home to more than 1 million people and famous for its jumbo prawns, crabs, lobsters, seer fish, salmon, and sprats which the local fishing community relies on for a livelihood.