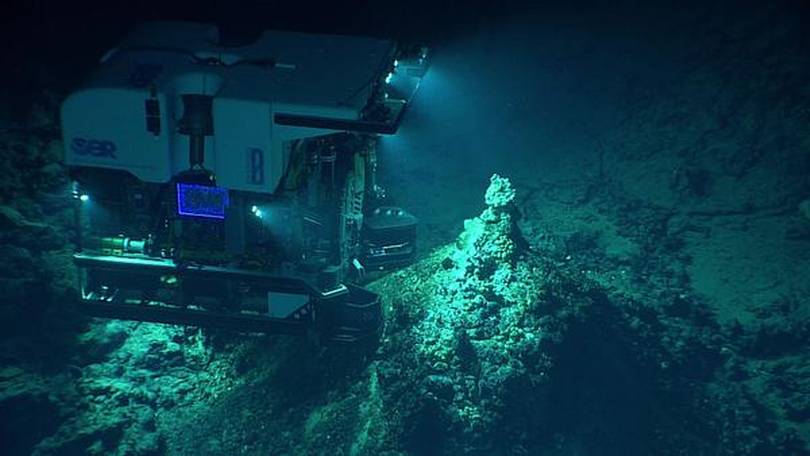 India - The wonders of the deep seas - Frontline

Before we think about exploiting the deep seas for their mineral wealth, it is essential that we understand the unique and fragile ecosystems of these dark waters with their wondrous and diverse life forms so that we do not repeat the mistakes that have destroyed terrestrial ecosystems and contributed to climate change.

THE Indian Ocean is a region of high biodiversity, with India, one of the countries in the region, considered a repository of mega biodiversity. India has a coastline of approximately 8,000 kilometres. On January 1, 1966, soon after the conclusion of the International Indian Ocean Expedition in the 1960s, the National Institute of Oceanography, Goa, was established for oceanography-related research. On October 30, 2021, the Ministry of Earth Sciences launched the Samudrayaan project for deep-ocean exploration. A question that comes naturally to the mind is, how much have we advanced our knowledge of the oceans and seas of India from 1966 to 2021 and what do we know of their biodiversity?

The Samudrayaan project will explore the deep sea for minerals. What and how will this exploration impact life in these zones, especially when we have little idea of the organisms that occupy these waters? A 2016 paper published by the United Nations says that “between one-third and two-thirds of marine species may be undescribed”.

Despite the work being carried out by international institutes such as the National Oceanic and Atmospheric Administration (NOAA) of the United States, the Woods Hole Oceanographic Institution (WHOI), Massachusetts, U.S., and others for the last 20 years, our understanding of the geological and biological details of the deep region of the oceans has remained limited for several reasons. Extending from the Arctic Ocean to the Southern Ocean and at depths of 1,000 m (called the bathypelagic zone) to 11,000 m (hadopelagic zone), the deep seas are dark and cold and the pressure there is enormous. The deepest part is the Mariana Trench or Marianas Trench, located in the western Pacific Ocean at a depth of 11,034 m.

The crushing pressure had made it difficult to access this region until the technology making it possible to study the different habitats and the life forms found therein was developed. Historically speaking, the fascination for underwater exploration was driven mostly by the desire to retrieve sunken treasure. But legend has it that Alexander the Great was lowered into the sea in a diving bell so that he could watch the creatures living beneath the water. According to a Persian poem, Alexander, having conquered vast areas of land, wanted next to conquer the oceans. He ordered the building of glass diving bells to explore the oceans. From Aristotle’s writings, we know that diving bells were known from the fourth century B.C.

From diving bells in the fourth century to submarines, followed by bathyspheres and the bathyscaphe Trieste, the journey to study the deep oceans has made rapid strides. There are now remotely operated vehicles (ROVs), unmanned robotic autonomous underwater vehicles (AUVs) and, more recently, Alvin: a three-manned American deep-sea submersible fitted with sophisticated equipment, which has facilitated the discovery of mind-boggling diversity that challenges the very meaning of life in equally unique ecosystems.

Before any mineral exploitation occurs in these dark waters, it is essential that we understand the unique ecosystems so that we do not repeat the mistakes that have destroyed terrestrial ecosystems. India has been working in the field of deep-sea exploration of minerals since 1981 when the research vehicle Gaveshani first found polymetallic nodules in the Indian Ocean. But the biodiversity register of organisms from even the photic zones of the oceans is rather limited. Will the Samudrayaan project inventory the biodiversity? The various missions conducted by countries such as the U.S., Russia and Japan provide us with some idea of the unique biodiversity we are likely to discover in deep-sea benthic regions. The variety of the habitats and ecosystems that influence and drive the diversity of life provides us with some fascinating insights into the extent to which living organisms are capable of adapting themselves to their environment. Here are some examples of organisms surviving in uncommon habitats; if we ignore their story of survival, it will only be at our peril.

Seamounts are underwater mountains, large geologic landforms arising from the ocean floor. They are mostly extinct volcanoes. On the basis of satellite and bathymetric-mapping data, it is estimated that there are more than 100,000 seamounts that are 1,000 m high. It is estimated that the Pacific Ocean alone may have more than 30,000 seamounts. Sadly, only 0.1 per cent of these have been explored. Many are separated from one another by long distances. But all of them are hotspots for biodiversity, much of which may be endemic to the mounts. There is higher species diversity and biomass on a seamount than in the waters around it on the sea floor.

There are many reasons for the high species count. Seamounts provide something hard to come by in the deep ocean: a solid surface that organisms can to cling to, attach themselves to and grow. Many of the deep-sea animals on seamounts are permanently attached to the rocks. As these animals grow and reproduce, they create more three-dimensional structures on which newly arriving drifters can establish their homes. Much like the seeds of a plant, the larval forms of these sessile animals float away in search of a new mount to attach to and continue their life. Sessile organisms cannot move in search of food. They depend on the complex current patterns created by these mounts rising off the water column for their food. The strong ocean currents moving over a seamount provide the animals living on it with a continuous supply of planktonic food. Ocean currents also bring larvae from distant, quite geographically separated, areas. For these drifting larvae, the hard surface of the seamount provides them a place to settle down and grow. Thus, there is a community of unrelated organisms on a seamount, resulting in high biodiversity.