International
Spatial map of sea-level trend (mm/year) in the Indian Ocean from ORAS4 reanalysis for the period 1958-2015 and time series of long-term tide gauge records along the Indian coast and open ocean. The tide gauge locations are marked by green circles. The anomalies are computed with the base period 1976-2005. via India’s Ministry of Earth Sciences 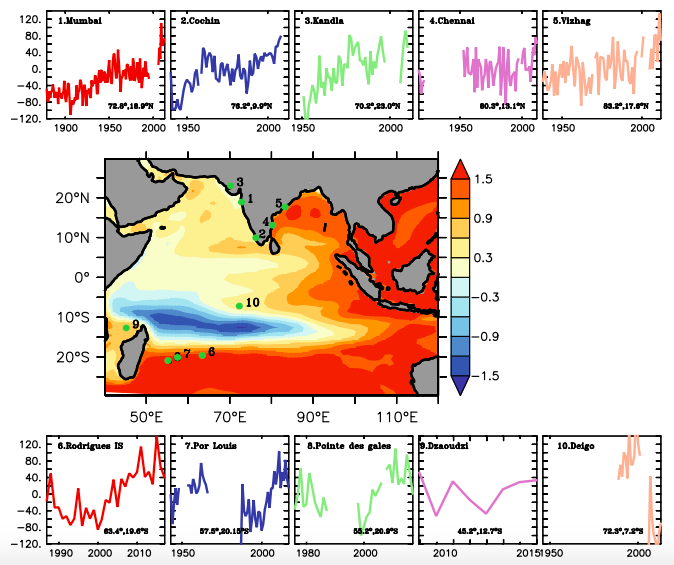 Bengaluru: Imagine living in Mumbai, and waking up to the view of the Arabian Sea every morning.

Now imagine having to abandon your home because sea level on Mumbai’s coast has risen, and every time there’s a storm or a cyclone, a wall of high waves rides on that water, breaching the embankment and submerging everything in its path. This scenario hasn’t played out yet – but it is likely to happen in the future.

Scientists have predicted this because there is considerable evidence that the sea level is rising everywhere on Earth. In fact, measurements show that the mean sea level has been rising faster in recent decades than in the entire 20th century. Researchers are also quite sure, through meticulous measurements taken across the globe, that much of the sea-level rise is due to human-induced global warming that’s melting ice sheets and glaciers, and heating up the oceans.

In the 20th century, the global mean sea level rose at 1.4 mm per year, according to the 2019 IPCC Special Report on Ocean and Cryosphere in a Changing Climate (SROCC). Between 2006 and 2015, the rate increased to 3.6 mm per year. In fact, mean sea level is projected to rise beyond 2100 no matter how much we change our greenhouse gas emissions from this point on, according to the report.

Another report released by India’s Ministry of Earth Sciences (MoES) and the Indian Institute of Tropical Meteorology (IITM-MoES), Pune, in June this year suggests India is following similar trends. Between 1874 and 2004, the mean sea level in the northern Indian Ocean rose by 1.06-1.75 mm per year – but at about 3.3 mm per year from 1993 to 2017.

The rising mean sea level is evidence that climate change is definitely happening, said Steven Nerem, a professor of aerospace engineering sciences at the University of Colorado, Boulder. It’s like popping a thermometer and taking your temperature when you feel sick, he told The Wire Science. “Measuring sea level changes is another way of diagnosing what’s happening with Earth.”

So the numbers tell us that the mean sea level around India is rising. The term ‘mean sea level’ – or the average height of the ocean – also sounds simple.

As it turns out, tracking it reliably is not simple at all.