International
Surfing competitions are a regular in India now — but the ocean pollution is still a problem.(Getty Images: Arun Sankar) 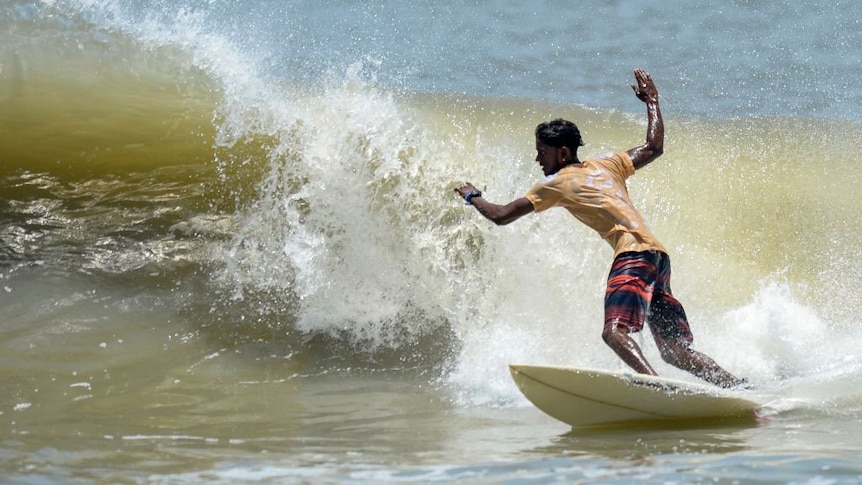 India - Surfing in India is taking off, but locals are staring down a tidal wave of plastic pollution

When Tushar Pathiyan and Ishita Malaviya moved to Manipal on India's west coast in the mid-2000s, neither knew their lives were about to take a left turn.

Tushar was studying architecture and Ishita journalism at Manipal University when they discovered the Surfing Swamis.

India's first surf school had been co-founded in 2004 by the original Surfing Swami, American Jack Hebner, down the coast from Manipal.

"The second year [of studying] we started surfing," Tushar says.

"For me, starting surfing as a grown-up, it flipped the game in terms of my priorities. We were chasing not so much money, but a certain lifestyle," he says.

A woman surfing in India was virtually unheard of back then, Ishita adds.

"When I first started surfing, if you literally googled surfing in India, nothing would show up," she says.

"When the competitions started, there were no women's categories."

Ishita went on to become India's first female professional surfer, competing in local events, and together with Tushar they started The Shaka Surf Club at a fishing village called Kode Bengre, about 40 kilometres up the coast from the Swamis.

Setting up a surf school in rural India came with its own set of challenges, Ishita says, but their primary goal was to get locals surfing rather than cater to tourists.

"In the rural areas I find it way harder to get girls in the water because rural families are much more conservative," she says.

"It's the patriarchy — it's the men who don't want the women to have these freedoms.

It's been more than 10 years since they started the club. And today, surfing in India, including with women, is taking off.

"When we started surfing, there were maybe 15 people in the whole country that surf," Tushar says.

"Now [there are] at least 20 to 30 surf schools and contests are happening — it's definitely grown."