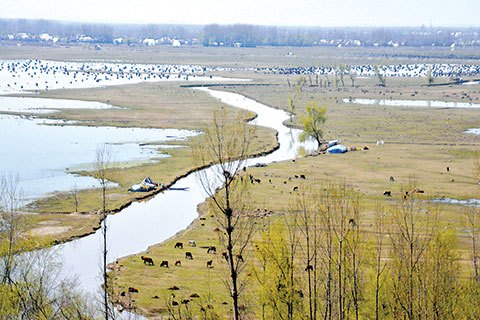 Once upon a time there was a huge lake northwest of Srinagar, India. Down some decades there will be no lake - Wular will just be a memory.

Some 54 kilometers in the northwest of Srinagar is situated the largest  lakes of Asia – the Wular lake, spanning Bandipora district headquarters and the Sopore town at an altitude of 1530 meters above mean seal level. Some believe that the present lake site was once a city of great, but wicked culture called Salamatnagar that submerged into water due to an earthquake. It is stated that before the devastating earthquake the area suffered moral waywardness. Its people were   prosperous sharing some similarities with Mohanjadaro culture thereby establishing 5000 year old history of Kashmir. According to the Tareekhi Budshahi, Sultan Zain-ul-Abdideen, known to be virtuous ruler of Kashmir, between 1420-1470 AD, had built to the east of the lake,  an artificial island called Zaina Lank, and a mosque where he would worship. Others had it as a refuge in times of ferocious winds that blew over the lake. Both narratives denote a positive spirit.

Nestled between the high mountainous ranges on the northeastern and the northwestern sides it acts as a huge absorption basin for flood waters, especially as a delta of river Jhelum, and maintains a balance in the hydrographic system in Kashmir. The lake with its associated wetlands/marshes works as a habitat for migratory water birds within Central Asian Flyway throughout the year, supporting rich biodiversity. It has an accident prone history as storms usually blow up in the afternoon and make it dangerous for navigation. Still it is a major resource for fishing, water chestnut, lotus, wickerwork material and  terrestrial & migratory bird hunting, thus providing economic support to hundreds of households in the vicinity, besides generating incomes from the visiting tourists.

It has a great scope for water sports – boating,  and water skiing. With hillock on its northern shore, Watlab, a middle point of 23 kilometer en-route journey between Sopore town  and  Bandipora, it hosts the shrine of Hazrat Baba Shakurddin – the spiritual guru of Hazrat Baba Piaam-ud-Din Reshi, whose shrine rests in the thick forests of Tangmarg to the side of  famous health resort of Gulmarg at an altitude of about 9000 feet from the sea level, in the district of Baramulla. The shrine at Watlab over-viewing the four directions remains a point of attraction for religious pilgrimage/tourists, a year round means of livelihood to thousands of people camping around the sacred site.