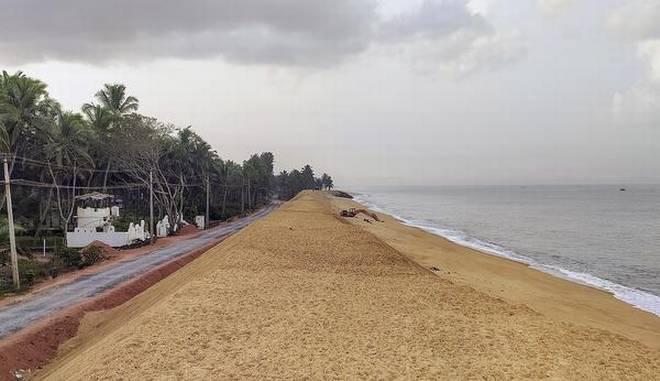 ‘Results of similar exercise were visible between Ullal and Someshwara’

Nearly a kilometre-long sand wall, 10 inshore berms (groyens), and two offshore reefs have come up along the Someshwara-Batapady beachfront to protect the seashore from erosion.

The works are being undertaken by the Ports and Inland Water Transport Department under the sustainable coastal protection and management investment project being funded by the Asian Development Bank (ADB). The project involves protection of the seashore from Ullal to Batapady and is divided into two areas —Ullal to Someshwara and Someshwara to Batapady.

Programme’s Joint Project Director Gopal Naik told The Hindu the results were already visible on the Ullal stretch while sand deposits were being witnessed on the Someshwara-Batapady stretch too. Some visible results should be available before the onset of monsoon on the Batapady stretch, he said.

Sand removed from the Gurupura (Phalguni)-Netravathi estuary was brought and dumped along the beach between Uchchila and Batapady forming a massive wall as a part of beach nourishment.

On the other hand, construction of two offshore reefs, about 600 m from the shore too, was completed. Concrete tetrapods were placed at their peripheries for protection of the reefs. At the same time, 10 inshore berms, each 70 m long, too were built from Uchchila to Batapady, Mr. Naik said.