International
Chellanam, a coastal village faces the brunt of an increasingly erratic monsoon, floods, and cyclones. The low-lying region gets inundated with seawater, and waves crash into a dilapidated seawall sending stones flying into homes. All photos by Supriya Vohra/Mongabay. 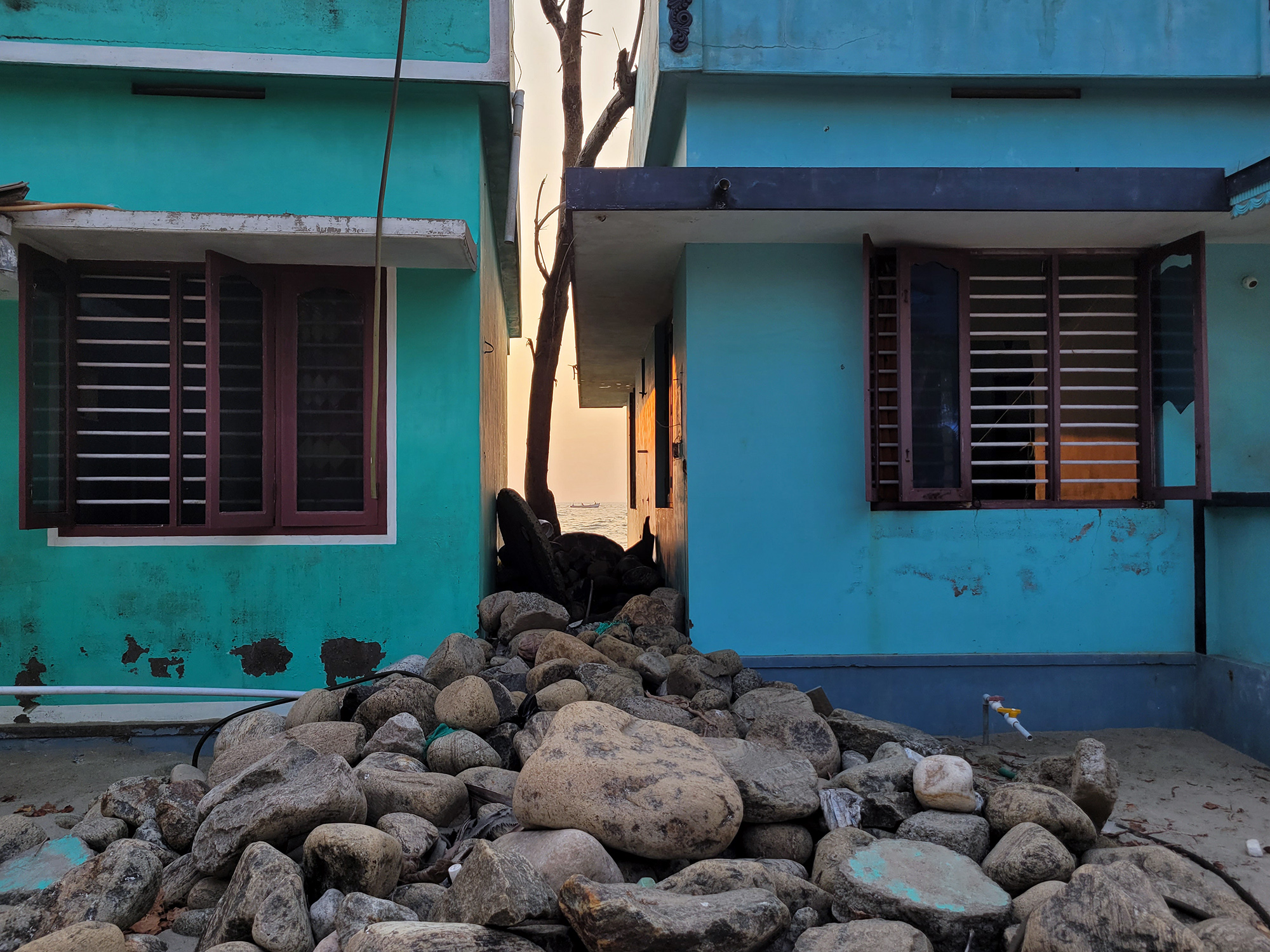 In November 2018, a study by the National Centre for Earth Science Studies showed that 60 percent of Kerala’s coastline is under erosion. It underlined that coastal development in the form of urbanisation, tourism, and “unscientific shoreline protection methods” has led to the coastline becoming unstable.

At 5 p.m. on February 10, at least 30 residents of Chellanam, a coastal village near Kochi in central Kerala, gathered on the side of the village road. The group was a motley of men and women of ages ranging from 40 to 75 — fishers, fishworkers, fish sellers, boat owners, and homeowners. They had set up a temporary shelter with bamboo, tarpaulin and bright green plastic chairs. Two speakers and a mic were also arranged. A huge banner with their cause and demands, and a whiteboard stating the day of protest – 837.

The group, part of a local non-profit forum Kochi Chellanam Janakeeya Vedi, were protesting the loss of their homes and livelihoods to coastal erosion and demanding that the government take proper action to protect their coastline. Their protest in Chellanam began on October 28, 2019, shortly after the village started experiencing severe erosion, and continues till date.

Chellanam is just one of the many villages affected by coastal erosion in the southern Indian coastal state. In November 2018, the National Centre for Earth Science Studies (NCESS) published a shoreline assessment study for southwest India. The study analysed the 1968-2014 period using multi-dated shoreline images and Survey of India (SOI) topographic charts. The analysis revealed that almost 60 percent of Kerala’s coastline is eroding. Apart from seal level rise, anthropogenic factors are a leading cause for an irreversible loss of land.

Kerala’s 590-kilometre long coastline, extending from Poovar in Thiruvananthapuram in the south till Thalapadi in Kasargod in the north is a dynamic coastal stretch. It lies sandwiched between the Arabian Sea on the west and the Western Ghats on the east. Its coast is intercepted by 41 rivers that originate from the Western Ghats and flow into the Arabian Sea through inlets that are connected to the sea via estuaries/lagoons.

Coastal erosion is the wearing away of the land by the sea. It is a long-term removal of sediment along the coastline. On dynamic shorelines, coastal erosion is a seasonal process. The littoral current is a combination of longshore currents that flow parallel to the shore and cross-shore currents that flow onshore-offshore. These currents transport sediment in both the directions and the beaches recede and accrete seasonally.

Kerala has three distinct seasons – pre-monsoon from February to May, the southwest monsoon from June to September and the northwest post-monsoon from October to January. The longshore currents generally flow north to south during the monsoon and in the opposite direction in other seasons. One of the primary reasons for erosion is the influence of monsoonal and non-monsoonal waves. The beaches, after being subjected to seasonal erosion, are capable of completely regaining their original shape.

But, over the years, as the NCESS study indicates, coastal development in the form of urbanisation, tourism, and “unscientific shoreline protection methods” has led to the coastline becoming unstable. Anthropogenic activities such as the construction of hard structures (breakwaters, seawalls, groynes), dredging of channels, beach/river sand mining, and damming of rivers have a negative impact on the coast. They obstruct the natural flow of the water, cause a shortage of sediment supply, and cause erosion on one part of the land and accretion on another part.