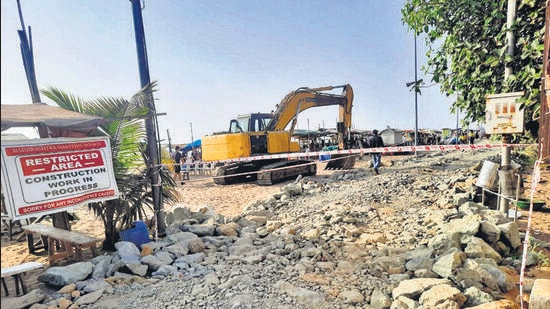 Mumbai: Despite clear directions from the National Green Tribunal (NGT) to all coastal states in April this year, to halt further construction of anti-erosion bunds and sea walls, the Maharashtra Public Works Department (PWD) has put forward 22 proposals before the Maharashtra Coastal Zone Management Authority (MCZMA) to build 42 sea walls across the state coastline, including at Gorai and Madh in Mumbai

The proposals will be considered in the MCZMA’s next meeting on August 5.

A senior official in the PWD’s harbour engineering department said, “These sea walls are necessitated based on coastal erosion data gathered by us. This is then shared with the Central Water and Power Research Station (CWPRS), Pune, which shares the design of the sea wall with us for execution. All of the proposed sea walls which have been placed before the MCZMA are planned in areas where we have seen high rates of erosion, particularly after cyclones in recent years.”

The official also said, “We are not aware of any NGT order barring construction of sea walls. Please share it with us. We will have a look and take steps accordingly.”

This move has irked environmentalists, who on Monday wrote to the MCZMA asking it to exercise discretion while considering these proposals. In an email to the environment department, Prasad Khale, senior conservation officer at the Mumbai-based Conservation Action Trust (CAT), wrote, “We would like to put on record the order of Hon’ble NGT (Southern Zone) dated 11.04.2022 regarding seawalls. The order deals with the issue of protection of stretches of coastline affected by the human-induced erosion caused by hard structures.”

On April 11, the NGT observed, “There is a need to replace hard structures like seawalls, groynes etc. with softer options such as beach nourishment, sand bypassing, dune planting, offshore submerged reefs, etc. Thus, the general principle of “working with nature” would be a better approach for cost-effective and sustainable coastal protection measures.” The NGT also directed all coastal states to upgrade their respective Shoreline Management Plans by identifying eroding stretches within six months. “Pending preparation/updation of such SMPs by the Coastal States/UTs, no further hard structures for erosion control be raised or constructed,” the NGT’s principal bench observed.