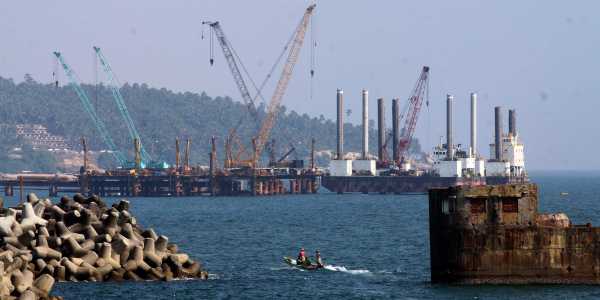 The Rs 7,525-crore seaport is being built in a Public Private Partnership (PPP) between the Kerala government and the Adani Vizhinjam Port Pvt. Ltd.

Shanghumukham Beach, just outside the domestic terminal of Trivandrum International Airport in Kerala, no longer exists. Once among the most popular landmarks in the city, it now lies completely submerged in the Arabian Sea. Large, angry waves have also eaten away at the coastal stretch of the only road that connects the domestic terminal to the rest of the city. Vehicles bound for the airport now struggle to pass through the narrow stretch that remains of the once well-laid road. Still unsatiated, the sea has now started advancing towards the airport itself.

According to Vijayan Joseph, a former researcher with the International Ocean Institute, coastal erosion started in the region in the 1970s when a minor breakwater was constructed for the Vizhinjam fishing harbour. However, the advancement of the sea has accelerated alarmingly after construction began in 2015 on Thiruvananthapuram’s much-touted Vizhinjam International Deepwater Multipurpose Seaport.

The Rs 7,525-crore seaport is being built in a Public Private Partnership (PPP) between the Kerala government and the Adani Vizhinjam Port Private Ltd (AVPPL), a subsidiary of the Ahmedabad-based Adani Group’s Adani Ports and SEZ Ltd (APSEZ), which won a bid for the project five years ago. Initially slated for completion in 2018, the project has been plagued by delays, but promises to be India’s deepest port, capable of handling 80% of the country’s cargo trans-shipments.

The state government has contributed 360 acres of land to the project and permitted AVPPL to reclaim 130 acres from the sea. But some environmentalists, activists, and fish workers blame the upcoming seaport and the construction of its breakwater for large-scale coastal erosion that is wiping out more than three dozen fishing villages, threatening the very existence of areas such as Kovalam, Valiyathura, Beemapally, Vizhinjam, Veli, Kallumoodu and Muttathara.