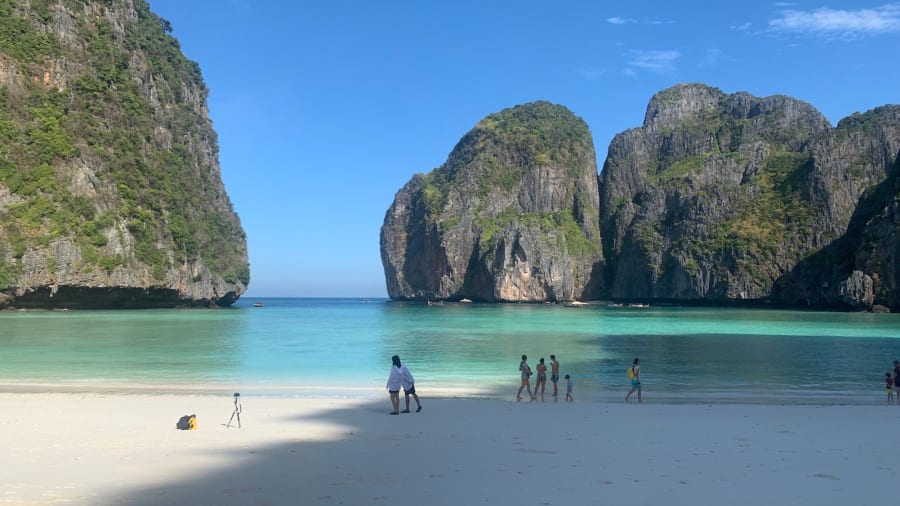 IN - Tourism killed Thailand's most famous bay. Here's how it was brought back to life

Maya Bay, Thailand (CNN) — It's just past 7 a.m. on a February morning in Maya Bay, several weeks after authorities reopened what is one of Thailand's most popular tourist attractions to the world for the first time since June 2018 following a massive rehabilitation program.

A lone tourist walks along the shore, the towering limestone monoliths appearing to float over the surface of the water, their bases eroded by millions of years of lapping salt water. In the distance, blacktip sharks swim through the bay, their fins breaking the surface.

It's a surreal scene, having this spectacular cove largely to oneself.

In the hours to follow, a slow but steady trickle of arrivals becomes a deluge as dozens of tourists trudge down a newly erected boardwalk, making their way to the celebrated white-sand beach, phones at the ready as they take selfies and pose for photos.

Those who venture more than a few steps into the water are met with loud whistles from a park official overlooking the beach from a sheltered lifeguard tower nestled in the trees edging the sand; swimming is not allowed, though visitors can wade a few steps in.

But some tourists are seemingly unable to resist the aquamarine waters of the bay and attempt to push the boundaries. One French tourist is issued a 5,000 baht fine (about $137) for repeatedly ignoring the rule.

On the boardwalk, an elderly woman furtively smokes a cigarette near the entrance to the beach -- a strictly no smoking area.

It's disheartening, but a huge improvement over what visitors once experienced here.

The beach that was loved to death

For Thai authorities, balancing the need for travelers -- tourism contributed about 20% to Thailand's GDP prior to the pandemic -- with the urgent call to protect the park's precious natural resources is an ongoing challenge.

"If you ask me as a scientist, keep the bay for the sharks. But as we know, the bay is a big tourism spot. So we have to compromise."