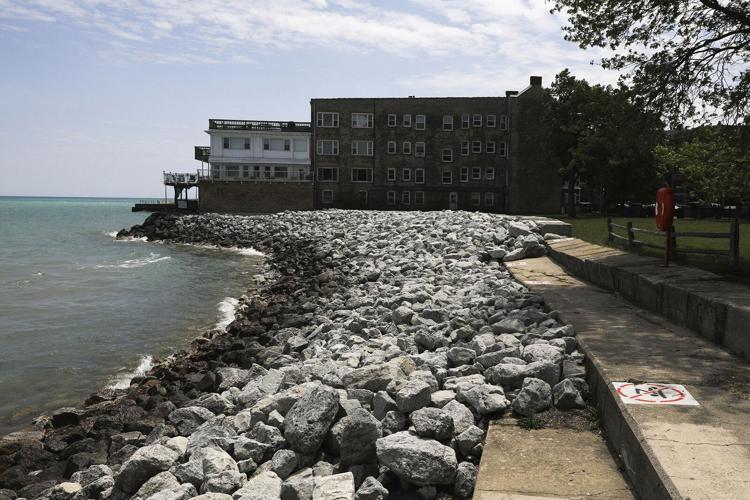 CHICAGO — Giant concrete barriers separate a field of jagged rocks from a grassy playground at Rogers Park Beach on Lake Michigan. There is no white sand. Only “do not swim” signs spray-painted on the uninviting blocks.

The city filled in the beach along with three others in the same half-mile stretch after a particularly severe storm in 2020 threatened to erode the beaches entirely.

Kelly Jimenez, 37, lives across the street and visits every day with her son, Alastair, when the weather permits. She and her family moved to their apartment three years ago, and she remembers feeling the strongest sense of community at the beach, where neighbors would come to walk their dogs in the morning with coffee mugs in hand. She said the community is still strong, but the beach was a big part of it.

“The whole neighborhood was really devastated to lose the beaches. Temporary (beach closure) means many, many years in city-talk. We love being on the lake, we love being here. It’s a huge privilege,” Jimenez said recently. “The beach was a big part of why we came.”

As Chicago battles erosion intensified by climate change on its 26 miles of public lakefront, officials are scrambling to find more money for repairs, scientists are tracking the disappearing sand and environmental groups are seeking ways to protect the fragile resource.

From the North Side to the Indiana border, years of erosion have taken a toll. Sand loss in places like Rainbow Beach revealed old lakefill material, what appears to be cement pieces used as the foundation of houses, and other debris, according to Robin Mattheus, a coastal geology research scientist with the Illinois State Geological Survey.

“Lake levels came up, and it didn’t take much more than a couple of storms to really move a lot of sand from one portion of the beach to the other. And it’s basically stripped sand off of the old infrastructure that was buried by the beach,” Mattheus said, describing Rainbow Beach.

This year, as the city continues to invest in anti-erosion countermeasures, the U.S. Army Corps of Engineers is poised to conduct a sweeping new study — the first of its kind since the 1990s.

Beach season is relatively short in Chicago, but according to the Chicago Park District, draws millions of people and is a major source of summer tourism.

Twenty-two beaches opened for Memorial Day weekend, and a few souls braved the still ice-cold waters or sweltered on towels in the sand. But even parts of the lakeshore that opened for the summer are showing the effects of several years of severe erosion, intense storms and near record lake levels.

Heather Gleason, the Chicago Park District’s director of development, said the emergency measures at the closed beaches in Rogers Park are meant to be temporary, but any reopenings are contingent on funding.

“We don’t have a specific plan for how it will look because we don’t have the funding,” Gleason said. “So once we get the funding going, then we will go through a community process and discuss what those features will look like.”

In the heart of the city, just steps from the Doane Observatory at Adler Planetarium, hundreds gathered at 12th Street Beach as they enjoyed the three-day weekend and the kickoff of beach season. But 12th Street has also suffered from erosion and, according to the Park District, is in need of repairs to its lake wall — repairs that are set to begin this month and be completed by October. The beach will remain open during the renovation.