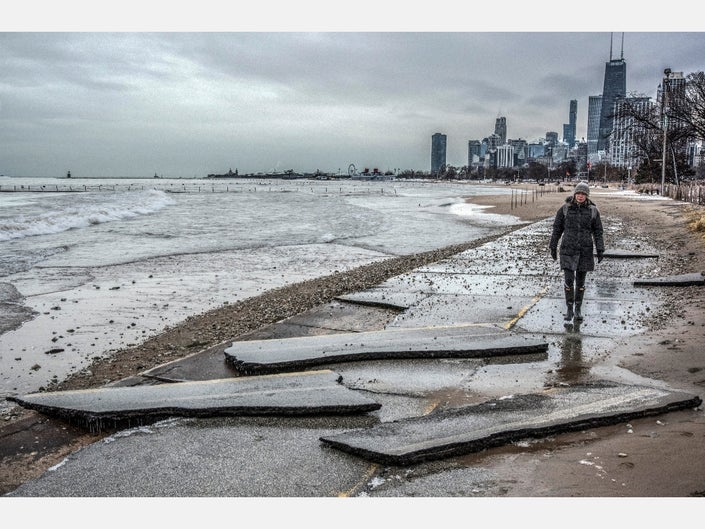 IL - After the Flood: How Chicago Copes With Effects Of Climate Change

A scene from earlier this year in Chicago: Cyclists, runners, and pedestrians dodge chunks of uprooted asphalt scattered across the Lakefront Trail, some pieces as large as dinner plates. Feet away, swollen Lake Michigan laps at, and partially submerges, the public walkway that typically rests well above the water line. Farther north, the sand at two public beaches is gone, washed away in one January weekend. And residents who live near Lake Michigan are regrouping following winter flooding that inundated portions of their high-rise buildings.

Chicago is encountering firsthand the effects of climate change on the Great Lakes, the result of record-high lake levels, warmer temperatures, and more frequent major storms. This winter, Lake Michigan reclaimed large stretches of lakefront in the city, especially following a particularly damaging storm in January. Chicago is known for its harsh winters, and that January storm was strong, but it was not out of the ordinary. Yet it contained a perfect mixture of extremes that spawned widespread waterfront destruction.

"It's just the preexisting condition of that elevated lake level, combined with the storm, that really made for that even larger wave height – even more wave power – that created all that damage," said Trent Ford, Illinois State Climatologist.

The Lake Michigan-Huron Basin has experienced near record-high lake levels since last year and tipped into the "record" category in January. "We are forecasting levels to remain above record highs" until July, at least, said Deanna Apps, a physical scientist with the U.S. Army Corps of Engineers. Lake Michigan reached its all-time highest level in October 1986, and it now sits just inches below that mark. "If we do experience the continued water conditions which we've seen over the last year, there is the potential for us to surpass that record," Apps said.