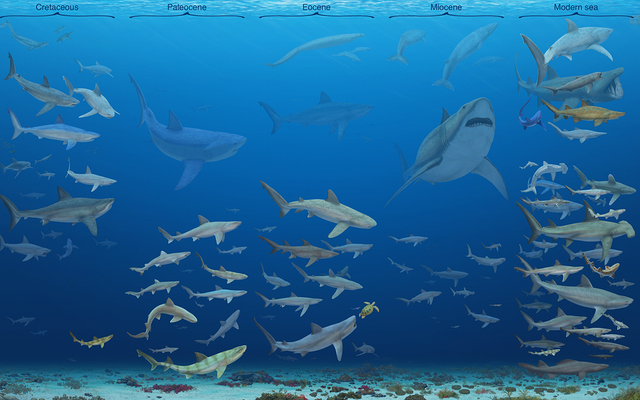 Before humans and early primates, before dinosaurs, and even before trees, there were sharks. Sharks have been around for more than 400 million years (although how long exactly remains contested).

Before humans and early primates, before dinosaurs, and even before trees, there were sharks. Sharks have been around for more than 400 million years (although how long exactly remains contested). They have survived five major mass extinctions.

But the sharks of long ago are not like the ones we see today. In fact, we still understand quite little about their long-term evolution. Our research, published today in the journal Current Biology, demonstrates how shark evolution over the past 83 million years has been driven by diet preference and climate change — leading to the diversity we see today.

As it turns out, being picky about your prey is a risky game for sharks to play.

When the scales tipped

One of the more peculiar patterns in biology is for very closely related orders of living animals to have greatly different numbers of species. A notable example is the difference in species number between mackerel sharks (the Lamniformes order) and ground sharks (the Carcharhiniformes order).

Both orders share nearly 170 million years of evolutionary history, and both have species found the world over. However, there are only 15 species of Lamniformes known today (including the great white shark), compared to more than 290 species of Carcharhiniformes (including hammerheads, tiger sharks and many species found on coral reefs).

But why do some orders of shark thrive, while others dwindle? To find out, we turned to the fossil record.

The fossil record reveals shark species in prehistoric times followed a very different pattern to species alive today. Before the “age of dinosaurs” ended some 66 million years ago, at the end of the Cretaceous Period, Lamniformes were more diverse than Carcharhiniformes.

To investigate this shift, we looked at changes in the shapes of shark teeth over the past 83 million years.

Unlike their soft cartilaginous skeleton, shark teeth are made up of a substance called “enameloid”, making them very hard. Sharks also continuously grow new teeth, which means their teeth provide an almost continuous fossil record.

Luckily, the shapes of shark teeth also provide rich information on their diets. For instance, a fish-eating shark is likely to have pointy, narrow teeth — often with multiple cusps to increase its chances of catching slippery prey (see the image of the mako shark below, a predominately bony-fish specialist).

By comparison, a shark that specialises in hunting seals is more likely to have broad teeth, which may be serrated to help with cutting. It is precisely this variation in tooth shape which we focused on in our latest study.

By examining more than 3,000 teeth, we found a clear link between changes in tooth shape over time and changes in the environment that took place during and after the end-Cretaceous mass extinction — the same event that wiped-out non-bird dinosaurs about 66 million years ago.