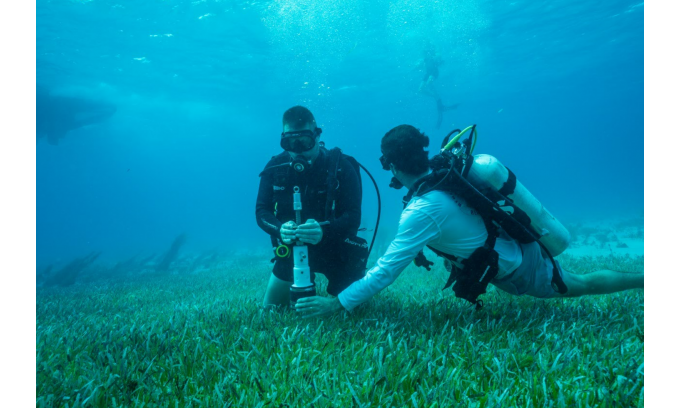 Discovered by Tiger Sharks, Validated by Technology: Hxagon is working with Beneath The Waves, a conservation NGO, to help protect marine environments in the Bahamas. Using bathymetric airborne Lidar solutions, researchers are able to map, study and quantify the region’s endangered seagrass ecosystem.

This process can determine the extent, composition and condition volume of seagrass, allowing the team of researchers to plan conservation of the ecosystem as a ‘blue carbon’ habitat. This project will potentially launch one of the world’s most impactful nature-based mitigation efforts while protecting biodiversity in the Caribbean islands.

R-evolution, Hexagon’s sustainability business venture, is leading the way in accelerating the transition to a sustainable global economy by identifying and attracting capital to finance business opportunities that benefit the environment and society. For one project, R-evolution takes advantage of cutting-edge airborne bathymetric solutions from Leica Geosystems, part of Hexagon, to promote decarbonization, the protection of coastal ecosystems and the preservation of biodiversity.

The world has seen an exponential increase in carbon emissions, resulting in drastic changes to the climate and threatening life on Earth. Carbon sinks are one powerful resource nature has at its disposal for keeping carbon dioxide levels at bay. For too long, however, the carbon discussion has centred around land-based carbon sinks, such as forests, while neglecting the biggest and most global storage depot on Earth: the ocean.

‘Blue carbon’ ecosystems refer to coastal and marine vegetated habitats – such as seagrass meadows, salt marshes and mangrove forests – that sequester and store carbon from the atmosphere and ocean. Seagrass, in particular, captures carbon dioxide more efficiently than land-based forests do. Moreover, since most carbon is stored in soil and sediments, it can remain there for millennia if left undisturbed. Nevertheless, despite their crucial role in mitigating climate change, seagrass meadows remain among the least recognized and least protected ecological habitats. The lack of data on the distribution of seagrass meadows poses a significant obstacle to conservation and restoration efforts.

In the Bahamas, home to a large seagrass ecosystem and also a designated shark sanctuary, scientists were studying sharks’ movements on behalf of the conservation NGO called Beneath The Waves. Their research unexpectedly revealed that tiger sharks spend a large portion of their life patrolling and foraging dense seagrass meadows. Using this insight, the organization leveraged a combination of sensor-tagged sharks, satellite data, marine vessel surveys and scuba divers to further investigate and map the extensive seagrass meadows of the Caribbean. This mapping project was an essential first step in learning more about the little-known ocean habitat. However, to protect and restore the blue carbon sinks, the conservancy’s findings needed to be validated with high-positional accuracy and datasets that can provide efficient, year-on-year change detection and monitoring.

Mapping large areas with vessels, divers and sharks is such a long and resource-heavy process that it is not an option for large-scale projects. To map, study and quantify the threatened seagrass meadows of the Caribbean islands at scale, Beneath The Waves teamed up with R-evolution. This sustainability business venture leverages airborne bathymetric Lidar technologies from Leica Geosystems, part of Hexagon, to capture details about the vital habitat, including its extent and composition. Bathymetric surveying supports environmental monitoring by mapping and classifying submerged vegetation and habitat to assess aquacultures and study marine ecology and hydrodynamics.