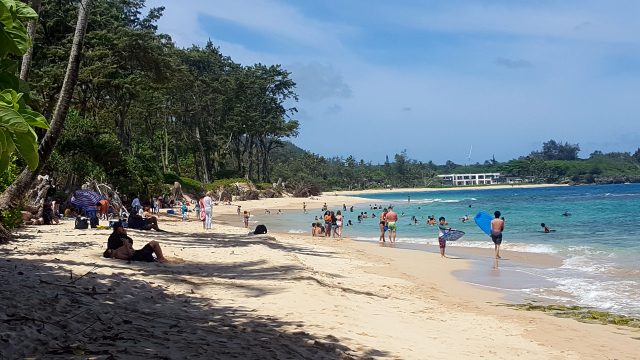 The City Council is considering halting commercial activity at Kokololio Beach. Residents and tour companies say beach-by-beach bans push the problem down the road and don’t solve the overall problem.

Hauula resident Desirree Madison-Biggs noticed an increase in the number of visitors outside her beachfront home over the summer. She points the finger at a large tour company that drops off an estimated 300 people a day at the nearly half-mile Kokololio Beach.

Concerns about heavy foot traffic and environmental impacts at the Windward beach have prompted a bill before the Honolulu City Council calling for a ban on tour stops there. That would add it to a list of more than a dozen Oahu beaches where commercial activities are banned.

But critics say the piecemeal approach pushes the problem to other coastline communities and doesn’t solve the underlying issue of overuse and tensions with local residents. Owners of commercial tour companies, meanwhile, are worried they will be pushed out of business if the bans continue to spread across the island.

“We don’t want to have a heavy-handed approach,” Madison-Biggs said. “I don’t think we should stop all commercial activity. Is there a way we can manage our beaches and the wildlife where we as residents and locals feel like we want to give aloha instead of feeling like it’s demanded?”

Residents and tour companies say nixing commercial activities one beach at a time will not solve the problem, asking the City Council for a middle ground.

Council member Heidi Tsuneyoshi, who introduced the bill that would add Kokololio Beach in Hauula to the banned list, said the council has for a decade asked the Department of Parks and Recreation to create an islandwide policy but hasn’t yet seen evidence of a concrete plan.

“It’s just a feeling of frustration because we always get the same response,” Tsuneyoshi said. “The response is that this will push activity to other beaches, which we know is a possible consequence of taking action, but no action is not an option.”

Parks spokesman Nathan Serota said the department is working on an islandwide approach to better managing commercial activities, but the plan won’t be ready until the end of this year. He said it was delayed by a change in city leadership and the coronavirus pandemic.

“Mayor (Rick) Blangiardi and DPR Director (Laura) Thielen have been in office for under two years,” Serota said in an email. “Much of their efforts relating to parks have focused on restoring regular access, facility permitting during various Covid restrictions, deferred maintenance, and reviving park programs at 306 park sites islandwide. Basically, getting city parks back to regular order.”