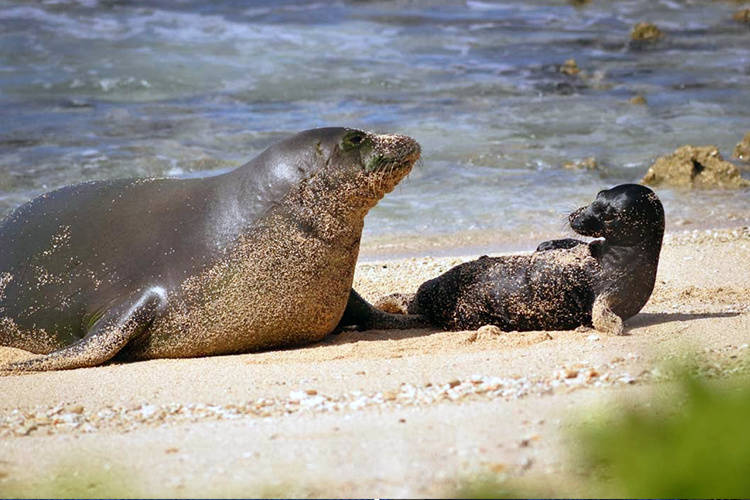 Wildlife officials announced the death of a beloved, female Hawaiian monk seal known to most who spotted her regularly as “Honey Girl.”

The National Oceanic Oceanic and Atmospheric Administration received notification on Thursday that monk seal R5AY had been found dead on a windward Oahu beach.

For more than 20 years, Honey Girl, delighted hundreds of monk seal fans as she rested on and gave birth to at least a dozen pups on Oahu and Kauai

She was spotted regularly on Oahu’s North Shore, and named NOAA’s monk seal of the month in July 2017 for her ability to survive numerous hooking incidents, one of which resulted in serious injury requiring surgery. NOAA said she was first identified as an adult seal in 2002, and that she had at the time given birth to at least 10 pups, eight of which were female.

She even became the subject of a children’s book, “Honey Girl: The Hawaiian Monk Seal” by Jeanne Walker Harvey.

The state Division of Conservation and Resources Enforcement assisted NOAA, along with other volunteers, in transporting the seal’s body to Kualoa Ranch for burial, where a pule (blessing) was performed by a Hawaiian cultural practitioner.

Officials said the seal’s cause of death is not apparent, but cited leading causes for monk seals such as toxoplasmosis, a disease spread by feral cats, and drowning when seals get caught in illegal lay nets. A post-morten exam will not be able to be conducted due to COVID-19 restrictions.

Toxoplasmosis has been the cause of death of two seals so far this year, including Pohaku, who died after a long battle with the illness at the start of April.

“We are deeply saddened that Honey Girl, one of the most iconic representatives of her entire endangered native endemic Hawaiian species, will no longer grace beaches around Oahu,” said DLNR chair Suzanne Case in a statement. “Her legacy calls for our collective respect and care for all our Hawaiian monk seals.”