Hawaii & Alaska
Kinugawa Maru’s frame is slowly being consumed by corals, though remnants of the ship remain above the water, rusting. Photo: Nathan Eagle/Civil Beat/2022 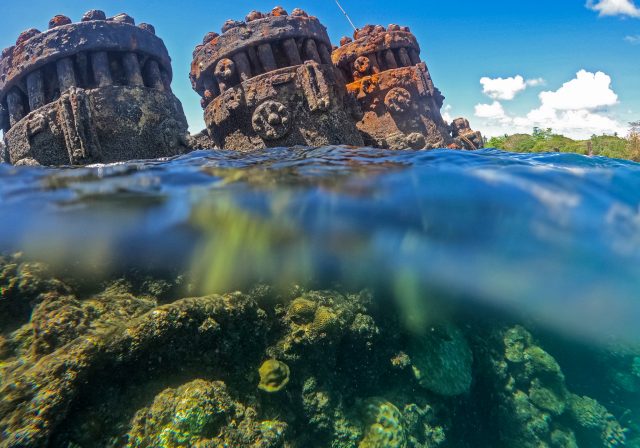 HI - ‘Ticking Ecological Time Bombs’: Thousands Of Sunken Ships From WWII Are Rusting At The Bottom Of The Pacific

Earthquakes, storm surges and other natural disasters could mean environmental catastrophe if oil and other hazardous material spill out.

Soon after the Solomon Islands was rocked by a 7.0 magnitude earthquake on Nov. 22, oil began lapping onto Guadalcanal’s sleepy northwestern shores.

More than 3,800 ships were sunk during World War II across the Pacific, each now holding the potential for catastrophic environmental fallout.

Many of these shipwrecks contain a potentially devastating threat: Thousands of tons of oil and an unknown quantity of bombs and chemical weapons.

Decades of decay combined with seismic activity and increasingly uncertain weather events has already ruptured some shipwrecks’ weakening fuel tanks and hulls, sending thousands of gallons of oil into the sea.

The problem is a big one for the Solomon Islands. The offshore area north of Guadalcanal is called Iron Bottom Sound, named after the 1,450 airplanes and 111 shipwrecks on its floor, more than half a mile down.

This project was produced, in part, with funding from the Pulitzer Center on Crisis Reporting.

Oil and fuel spills can destroy the reefs and ecosystems fundamental to Pacific Island economies, food systems and protection from the ever-increasing threat of climate change and sea level rise. Climate change is also causing more unpredictable and severe storms and changing sea conditions. The marine ecosystems that underpin life in the Pacific are already being compromised.

Pacific island nations and territories have long been warning about the impacts of climate change, calling for action globally as they already face its myriad effects.

Now, the increasing danger from shipwrecks and other World War II debris that is hidden beneath their waters is only adding to the peril they find themselves in.

Kinugawa Maru is just one of many shipwrecks dotting the northwestern coast of Guadalcanal and Iron Bottom Sound. Photo: Nathan Eagle/Civil Beat/2022

Out Of Sight But Everywhere

An iron sarcophagus is all that is left of the Kashi Maru, a Japanese merchant ship lying in the midnight-blue waters of Mbaeroko Bay. Corals adorn the steel hull, which has become a haven for marine life and a pilgrimage for scuba divers.

U.S. forces sank the 654-ton ship during WWII, in the bloody campaign for the Solomon Islands, as fighting migrated westward to the island of New Georgia in 1943.

The Kashi Maru’s crew had been furtively unloading cargo from the 172-foot ship, and had attempted to camouflage it under a thicket of native greenery.

From above, the ship appeared to be just another island among the more than 900 that comprise the South Pacific nation. But Indigenous Solomon Islander scouts alerted the Allies to the mysterious new island in Mbaeroko Bay. Their call ushered a flurry of strafing B-25 bombers and Naval Corsair fighters that blew a hole in the minelayer’s hull, sinking it yards off the sands of northern New Georgia.

The histories that have been written and recorded about the war have informed much of the recent research into the thousands of potentially polluting wrecks across the Pacific.