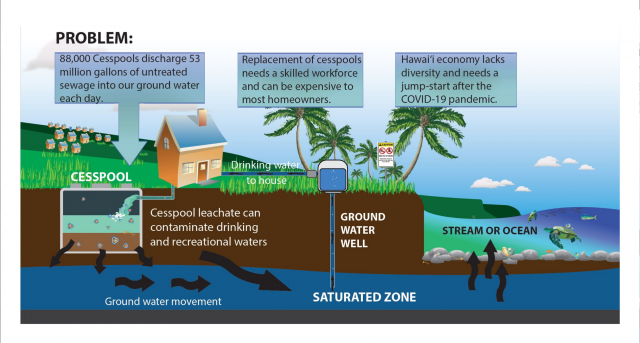 There is federal money on the horizon — and promising new technology too.

Last July, in my IDEAS Essay about how Hawaii has the highest number of cesspools per capita in the country, I advocated that the pandemic should motivate the state and counties to diversify our economy and develop the wastewater workforce that is needed to convert all of these cesspools.

Now, almost a year later, Hawaii has a major new ally in the work to convert cesspools: The federal government under a new administration is pushing policies and offering funding to do just that.

If there’s one thing most Americans should be able to agree on, it’s the need to repair our nation’s deteriorating infrastructure. Despite partisan politics, the U.S. Congress passed the Biden administration’s American Rescue Plan Act and its members are currently arguing over the proposed budget for the American Jobs Plan.

The new AJP bill would invest $1.7 trillion to get people back to work restoring our aging roads, bridges, water and wastewater treatment systems.

As co-founder of the nonprofit WAI: Wastewater Alternatives & Innovations, I’m focused on the last issue. Hawaii has some 88,000 cesspools across the state that discharge 53 million gallons of untreated sewage into our groundwaters each day. This sewage pollution poses harmful threats to public health, drinking water, the near-shore environment and coral reefs, along with Hawaii’s reputation as a world-class destination.