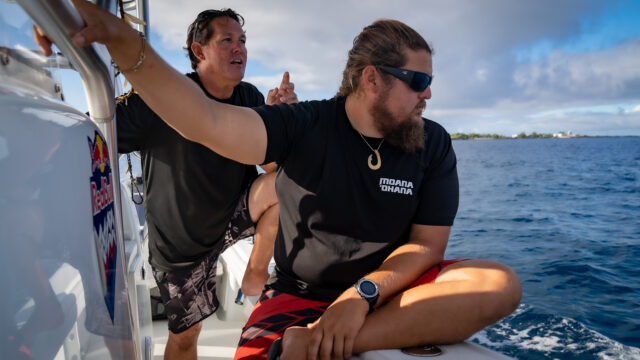 HI - The Shark Keepers: How One Hawaiian Family Is Reclaiming Its Legacy

This father-and-son duo are pushing for more culturally sensitive methods for academic shark research. Will the University of Hawaii listen?

On a recent outing off the Kona Coast, Michael Nakachi and his son, Kaikea, stopped their boat in the morning light just outside Honokohau Harbor and tossed hookupu — offerings — of ti leaves into the ocean before motoring any farther.

The elder Nakachi also placed mango wrapped in ti leaf over the side. The fruit came from a tree at his father’s house. Ling, the family patriarch, had just died in May.

The offerings scattered across the water. Then, moments later, several sandbar sharks emerged and swirled around the leaves, attracted by the organic matter. After a minute or so they disappeared below the surface.

The brief encounter was no accident. The Nakachis know these waters intimately, and they know precisely where to find the animals. They’re the descendants of Hawaiian kahu mano, or “shark keepers,” and in recent years they’ve doggedly sought to reconnect with their family legacy.

In fact, the Nakachis have been quietly pioneering a modern version of their ancestors’ cultural practice, one that involves exhaustive shark research on the water. They’ve done this, they say, with the blessing of prominent families rooted on the island.

“We try as much as possible to jump in the water, actively engage animals whether it be scuba, free diving, rebreather … all these various technologies,” said Michael Nakachi, who’s 55 and was raised in Waimanalo. His Hawaiian ancestry traces back to Maui. “And for most kanaka (Native Hawaiians) I think you have to embrace that. How can we use certain things that will … authenticate what the ancestors already knew?”