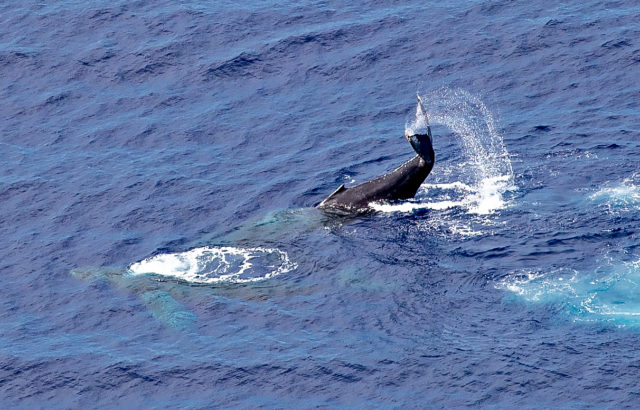 HI - The Navy Vs. Marine Mammals: How Often Do Ship Strikes Happen?

The Navy hires biologists and oceanographers to assess and document its environmental impact, but many of those impacts remain unknown.

The U.S. Navy is reviewing the impact of its operations on marine mammals after an environmental organization threatened to sue this summer in response to the death of two whales near San Diego.

The Navy’s Pacific military exercises from Southern California to Hawaii fall under a five-year permit approved in 2018 which gives the military an authorized “incidental take” — a calculation of the number of times the government believes Navy operations could harass, injure or kill marine mammals.

But critics question the accuracy of its estimates.

“Throughout the documents, they largely just dismiss the possibility that there will be a ship strike at all,” said Kristin Monsell, oceans program litigation director at the Center for Biological Diversity, a nonprofit that advocates for the protection of endangered species.

Navy officials have insisted they would know if they struck a whale. But the center threatened to sue after an Australian Navy destroyer unknowingly dragged two dead fin whales into port under its hull during a U.S.-led exercise in San Diego over the summer.

The Navy announced in July it would conduct the review. The Navy’s permit allows up to two fatal encounters with fin whales, but the Endangered Species Act also requires the government to reevaluate its calculations if new information or factors it hadn’t considered come to light.

“I think the destroyer pulling into base with those two fin whales stuck to its hull shows that those assumptions are erroneous and that ship strikes are a much larger threat to these endangered whales than the Navy considered,” Monsell said.

Over the last few decades, the Navy has hired scientists to collect and analyze data on the environmental impact of its operations. The Navy has also spent millions on supporting marine biology and oceanography research at universities and other civilian institutions.

However, the U.S. Pacific Fleet did not respond to numerous requests for interviews with its environmental team or answer questions about how many documented “incidental takes” it has recorded near Hawaii.

“In the case where you have to write it down on a logbook, that’s only when there’s like actual proof that this thing occurred and it’s unignorable,” said Navy veteran Zoe Garland, who served on both ships and aircraft over her seven-year career. “If there’s an opportunity to leave a logbook blank for something like ‘we hit a whale,’ they’re going to do it. It’s very likely that that’s going to occur.”