Hawaii & Alaska
A loan that Liliu Ross secured to build a new house on her Hawaii Island lot fell through in 2014 over concerns about unexploded ordnance. She and her son, Kealii Ross, continue to live in a shack that they have spruced up on the property. Credit: Cindy Ellen Russell/Honolulu Star-Advertiser 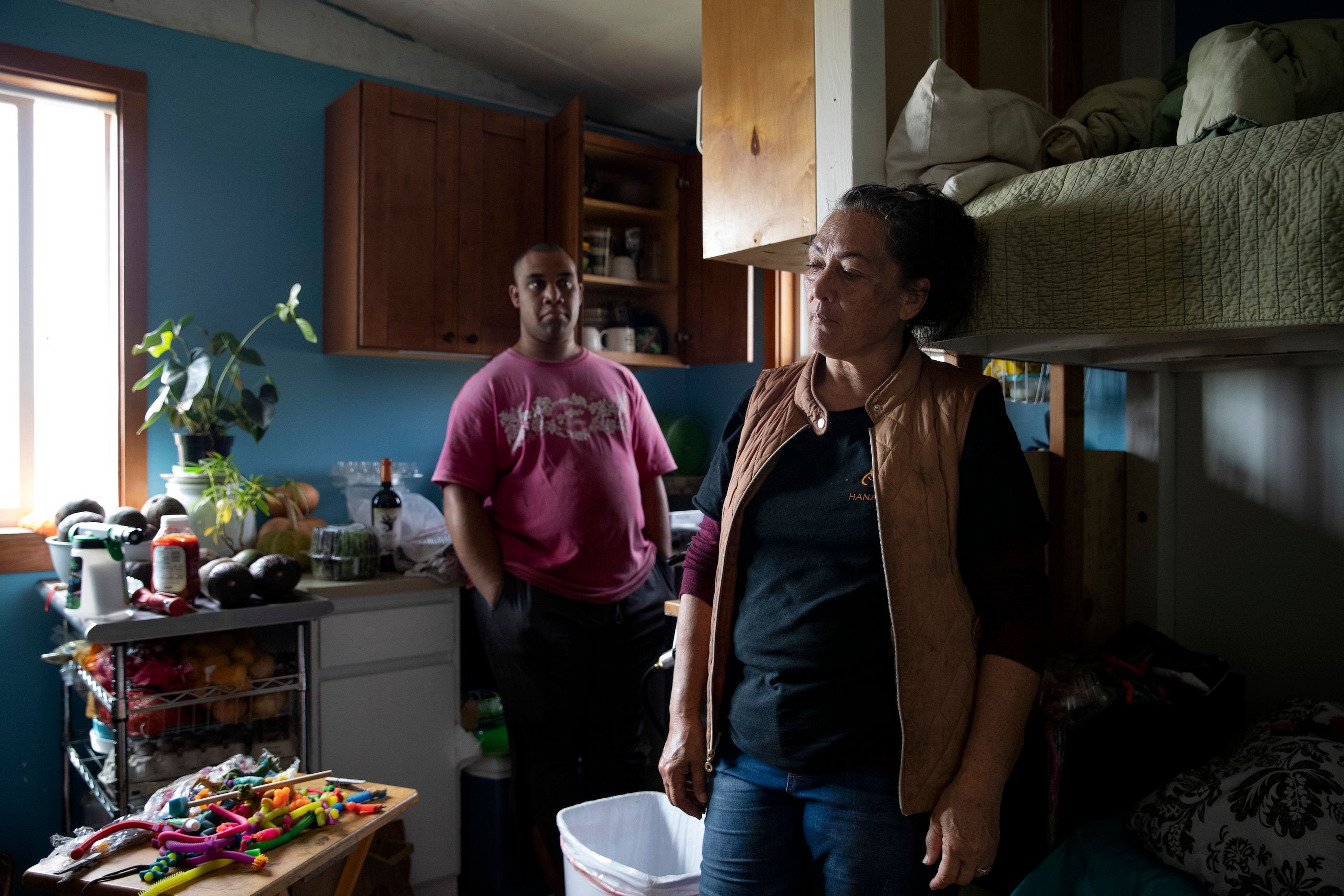 HI - The Military Pledged to Remove Unexploded Bombs From This Island. Native Hawaiians Are Still Waiting

The U.S. Army Corps of Engineers, which is leading the remediation effort, has been plagued by shoddy work and multiple regulatory disputes, according to an investigation by the Honolulu Star-Advertiser and ProPublica.

This article was produced for ProPublica’s Local Reporting Network in partnership with the Honolulu Star-Advertiser. Sign up for Dispatches to get stories like this one as soon as they are published.

For the better part of two years, Liliu Ross had lived in a one-room tin-roofed shack in the rural outer reaches of Hawaii’s Big Island. It had no running water and no electricity. But it provided shelter for Ross as she raised sheep and grew crops on land that her Native Hawaiian ancestors once called home. From the open fields and gentle slopes of her five-acre farm lot, she marveled at the stunning views of nearby Mauna Kea, one of the world’s tallest island mountains. Still, there were challenges to living under such conditions. At night she read by candlelight, and during the day she bathed outside with water she warmed in a pot over a fire.

So, in 2014, Ross secured a loan under a special program funded by the U.S. Department of Housing and Urban Development to help Native Hawaiians build or purchase homes on Native lands. An architect created drawings for a two-bedroom, one-bathroom house, complete with energy-efficient appliances and a covered lanai. And she even picked the location for the new home.

Get Our Top Investigations

Within months, though, her plan collapsed. Ross learned in a phone call from her builder that HUD had imposed a freeze on federal housing funds throughout the region. As it turned out, her property had been part of the Waikoloa Maneuver Area, a 185,000-acre site that was used by the U.S. military for live-fire training in the 1940s. Troops had fired an unknown number of grenades, mortars and other munitions that failed to explode, and many of the potentially deadly weapons remained, hidden beneath years of soil and vegetation buildup. Federal authorities wanted to ensure the land was safe to use.

But the funding freeze had sweeping consequences. Other prospective borrowers on Native lands soon found they could no longer obtain government-insured mortgages, the only type available on such properties. The freeze also meant that local and state governments could not tap the main sources of federal funding to develop affordable housing in the region — a critical need in a state with one of the most expensive housing markets in the nation. The action effectively thwarted a century-old promise by the federal government to return Native Hawaiians to their ancestral lands.

Money would flow again, HUD decided, after the military removed any unexploded ordnance, or UXO, and state regulators vouched for the land’s safety.

Eight years later, though, Ross is still waiting. The now-64-year-old farmer continues to live in the same shack. She is one of hundreds of Native Hawaiians who are unable to secure housing on lands that the government set aside for them in a trust. Many have already waited years — and sometimes decades — for the opportunity to build homes, farms and ranches.

“People are getting old, people are dying,” said Mary Maxine Kahaulelio, a prominent Native Hawaiian activist who lives near the UXO zone. “This is another form of delay for Hawaiians.”

No one can say for sure when relief will arrive. In one area, the state initially projected that the construction of 400-plus homes would be completed by next year. It paved streets, poured sidewalks, erected street lights and installed fire hydrants and road signs. But in 2015 it halted construction amid the federal funding freeze; not a single home has been built. Today, weeds and other vegetation are slowly overtaking the empty lots.

The U.S. Army Corps of Engineers, which is leading the remediation effort, has been plagued by shoddy work and multiple regulatory disputes, according to an investigation by the Honolulu Star-Advertiser and ProPublica. In one case, after state regulators raised concerns, the Corps rebid a contract to assess the UXO risk on the largest Native parcel in the region, prolonging a process that is years behind schedule.

The previously unreported details, laid bare in interviews and hundreds of pages of documents obtained through public records requests, provide further evidence of how government agencies have bungled the timely return of Native Hawaiians to their ancestral lands. The Star-Advertiser and ProPublica reported in 2020 and 2021 how the state was largely bypassing low-income and homeless Hawaiians because of the pricey homes it developed and how the federal government effectively circumvented a reparations law, depriving the program of prime properties suitable for housing. Today, more than 28,000 beneficiaries — the term for people who are at least 50% Hawaiian — are currently waiting for lots statewide, including nearly 6,000 seeking housing on the Big Island.