Hawaii & Alaska
via Hawaii Department of Land and Natural Resources 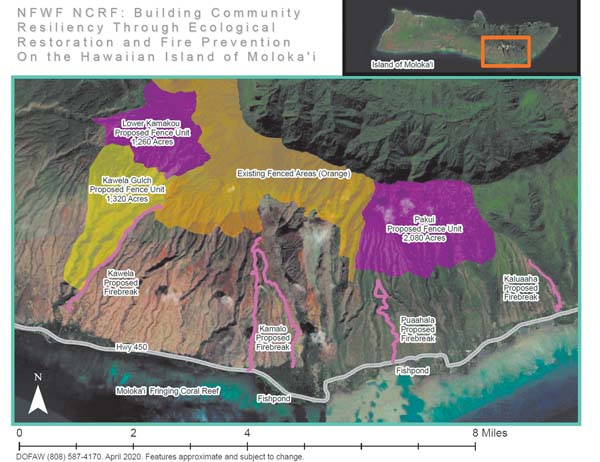 Forests on the southern slopes of Molokai are about to receive additional protections from threats like wildfires, erosion and flooding thanks to a $1.8 million award from the National Fish and Wildlife Foundation, the state Department of Land and Natural Resources announced Friday.

The funding will go toward proven tools such as fencing and removal of hooved animals, as well as creating firebreaks, which will lead to clearer ocean waters, vibrant reefs, restored plants and trees and fewer disruptions along the island’s main road that stretches from Kaunakakai to the east end, DLNR said.

“We are excited to support DLNR’s work to restore native forests, which will help to reduce risks of flooding, landslides and fire to communities on Molokai and will lead to healthier habitat for native species,” Erika Feller, director of Coastal and Marine Conservation for the foundation, said in a news release.

State Sen. J. Kalani English, who represents East Maui, Molokai and Lanai, said that watershed capital improvement project funds authorized by the state provided most of the match needed to apply for the grant. The larger Watershed Initiative is directing an additional $2 million of state CIP and operating funds to protect Molokai’s forests and employ Molokai residents.