Hawaii & Alaska
via University of Hawaiʻi at Mānoa 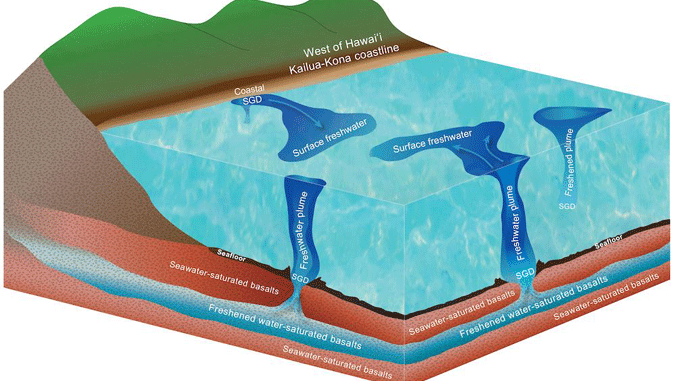 University of Hawaiʻi at Mānoa researchers demonstrated a new method to detect freshwater plumes between the seafloor and ocean surface in a study recently published in Geophysical Research Letters.

The research, supported by the Hawaiʻi EPSCoR ʻIke Wai project, is the first to demonstrate that surface-towed marine controlled-source electromagnetic (CSEM) imaging can be used to map oceanic freshwater plumes in high-resolution. It is an extension of the groundbreaking discovery of freshwater beneath the seafloor in 2020. Both are important findings in a world facing climate change, where freshwater is vital for preserving public health, agricultural yields, economic strategies, and ecosystem functions.

While the CSEM method has been used to detect the presence of resistive targets such as oil, gas and freshwater beneath the seafloor, this study is the first time CSEM was applied to image freshwater in the ocean water column, according to ʻIke Wai research affiliate faculty Eric Attias, who led the study.

“This study has profound implications for oceanography, hydrogeology and ocean processes that affect biogeochemical cycles in coastal waters worldwide,” said Attias. “Using CSEM, we now can estimate the volumes of freshwater emanating to the water column. This is indicative of the renewability of Hawaiʻi’s submarine freshwater system.”

Submarine groundwater discharge (SGD), the leaking of groundwater from a coastal aquifer into the ocean, is a key process, providing a water source for people, and supporting sea life such as fish and algae. According to UH Mānoa Department of Earth Sciences Associate Professor and study co-author Henrietta Dulai, the location of offshore springs is extremely hard to predict because of the unknown underlying geology and groundwater conduits.