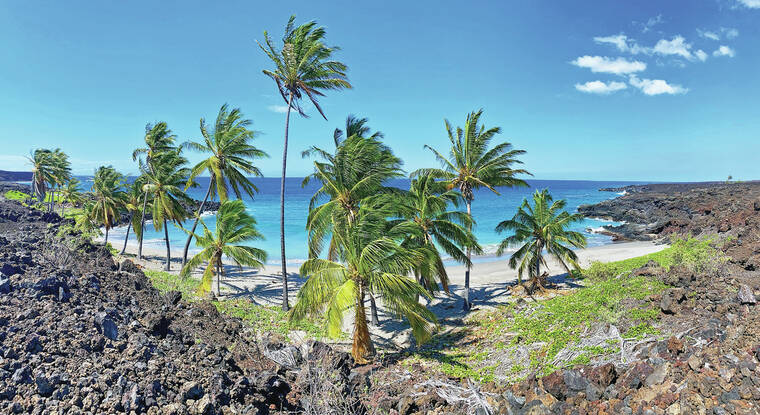 The Trust for Public Land officially transferred ownership and stewardship of Pohue Bay to the National Park Service on Tuesday, preserving the area’s unique natural and cultural resources from development. The 16,451-acre parcel, which covers an area from Mamalahoa Highway makai to the shoreline, is now part of Hawaii Volcanoes National Park.

Pohue Bay is the only white sand beach for many miles in the rugged district of Kaʻu. The bay is surrounded by undeveloped wilderness and is adjacent to Hawaii Volcanoes National Park’s Kahuku Unit, near the State Manuka Natural Area Reserve and Ka‘u Forest Reserve.

“Aloha ʻaina begins with our commitment to preserving our islands’ precious natural and cultural systems,” said Lea Hong, associate vice president, Hawaiian Islands State Director for Trust for Public Land. “We are grateful the National Park Service will steward the area with the support of the community, ensuring the history, culture and natural beauty of this place are protected for future generations.”

The trust purchased the parcel for $9.4 million via its Land and Water Conservation Fund and a donation from the Wyss Foundation. The trust is also donating an additional $800,000 to the Friends of Volcanoes National Park to support the National Park Service’s management of Pohue Bay.

Pohue Bay has been the site of several resort development proposals over the years, including the now-defunct Hawaiian Riviera Resort and even a space port. In recent years, community members identified the property as one of the highest priority acquisition/expansion areas in the Kaʻu Community Development Plan, and the acquisition of Pohue was recommended in the 2016 Hawaii Volcanoes National Park General Management Plan.

Prior the land transfer, the National Park Service met with community members in partnership with the trust and the Hawaii Alliance for Community-Based Economic Development to better understand the land’s cultural, historical and ecological significance.