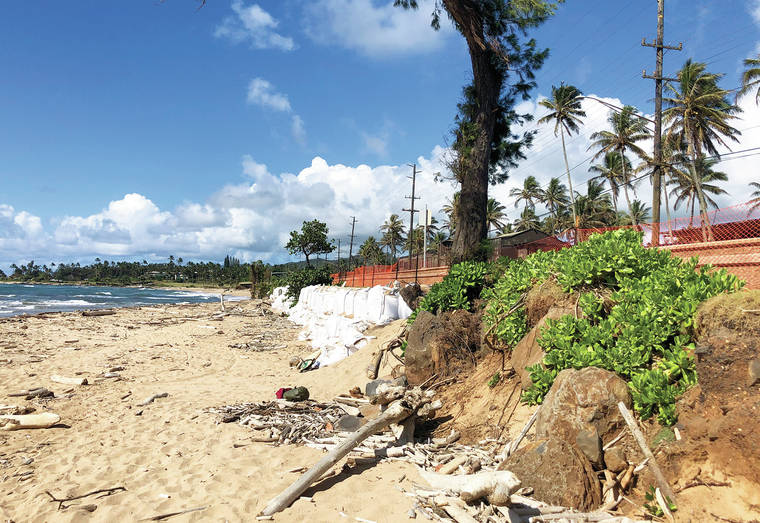 Erosion at Wailua Beach has forced the state Department of Transportation to place sandbags to protect Kuhio Highway. A new sand-saver project aims to rebuild the beach in the area the state is widening the highway near the former Coco Palms Resort.

WAILUA — The state is trying to rebuild Wailua Beach.

It’s a process that’ll include new technology that will trap sand and renourish the eroded beach that threatens Kuhio Highway, according to the state Department of Transportation.

It’s called a Sandsaver, and is made of polyethylene plastic and concrete. The sloped device has holes in the unit which allow waves to flow through. The holes have small channels that trap the sand on either side of the device.

“Essentially, (the technology) promotes the restoration of the beach through the natural wave action of varying sand on the beach and traps the sand on both the mauka and makai side of the device, and proposes to build the beach back,” state DOT Kaua‘i District Engineer Larry Dill said last week at a community meeting to discuss the latest Statewide Transportation Improvement Plan (STIP) priorities.

Erosion of Wailua Beach, which is coming up to the right-of-way owned by the state, has already undercut portions of the county’s bike path. Currently, sandbags have been placed along the beach to protect the structure that abuts the highway.

The Sandsaver was first used in Keyna in 2020, according to manufacturer Granger Plastics Company, and within four days the system was able to accumulate 1,500 cubic yards of sand in and around the system