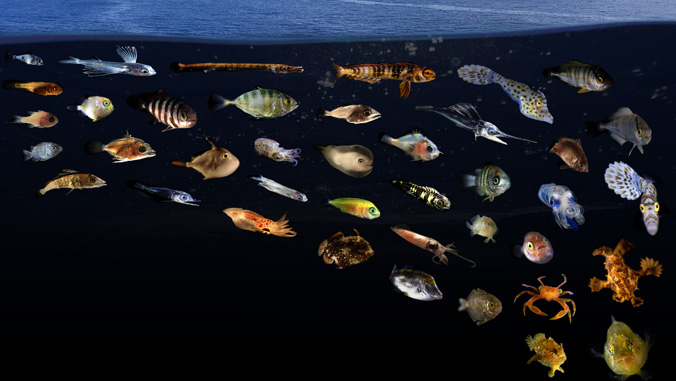 But what the larvae of most marine species experience during these great ocean odysseys has long been a mystery, until now.

A team of scientists from NOAA’s Pacific Islands Fisheries Science Center, the University of Hawaiʻi at Mānoa, Arizona State University and elsewhere have discovered that a diverse array of marine animals find refuge in so-called “surface slicks” in Hawaiʻi. These ocean features create a superhighway of nursery habitats for more than 100 species of commercially and ecologically important fishes, such as mahi-mahi, jacks and billfish. The findings were published in Scientific Reports.

Surface slicks are meandering lines of smooth surface water formed by the convergence of ocean currents, tides, and variations in the seafloor and have long been recognized as an important part of the seascape. The traditional Hawaiian mele (song) Kona Kai ʻŌpua describes slicks as Ke kai maʻokiʻoki, or “the streaked sea” in the peaceful seas of Kona. Despite this historical knowledge, and scientists’ belief that slicks are important for fish, the tiny marine life that slicks contain has remained elusive.

To unravel the slicks’ secrets, the research team conducted more than 130 plankton net tows to search for larvae and other plankton inside the surface slicks and surrounding waters along the leeward coast of Hawaiʻi Island, while studying ocean properties. They then combined those in-water surveys with a new technique to remotely sense slick footprints using satellites.