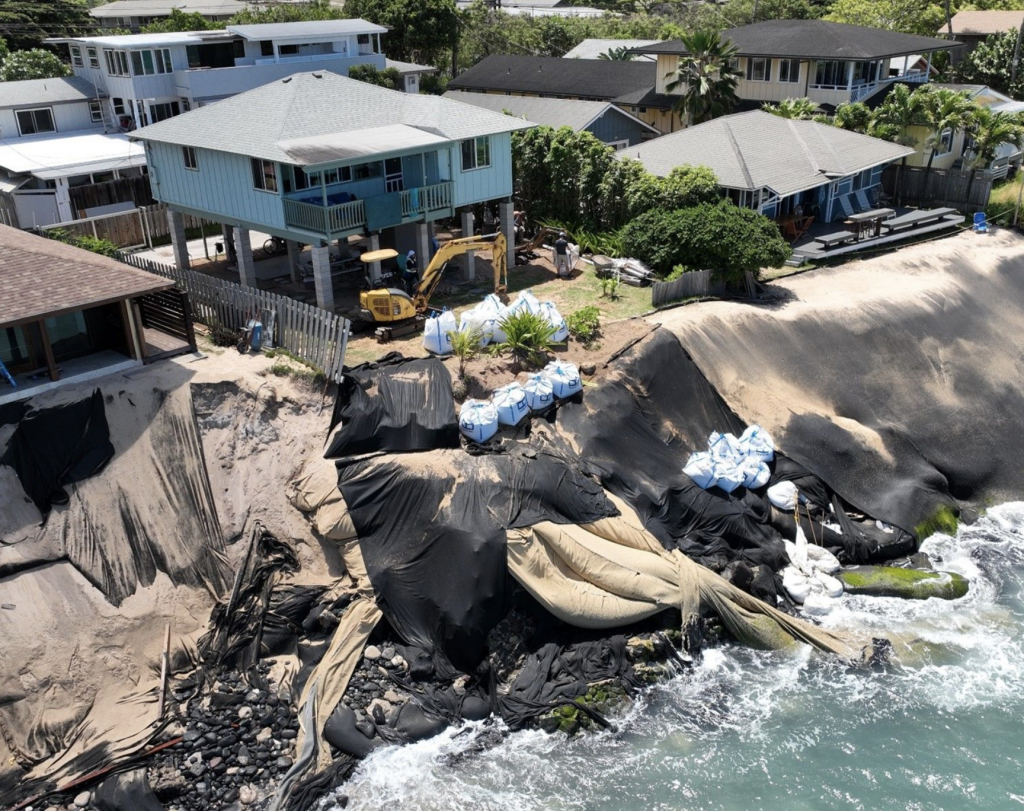 HI - No good options for homeowners and the public on Oʻahu’s North Shore, says DLNR

Twenty homes along Oʻahu’s North Shore and the public beaches below the dunes they rest on, face an ongoing battle over impacts of erosion.

Permits in the past have allowed homeowners to “shore up” land under their foundations, in an attempt to prevent their homes from toppling onto the beach and into the ocean. But state officials say many temporary emergency permits had have expired.

All the homes at Paumalu border public beaches within a State Conservation District.

“Earlier this month, utilizing a drone, we surveyed the area, and it revealed unpermitted shoreline hardening work continuing at a number of properties, in violation of Conservation District rules,” said Michael Cain administrator of the DLNR Office of Conservation and Coastal Lands. “This survey shows the enormous scale of the situation we face as regulators, and the desperate and illegal measures some homeowners continue to employ.”

“We allege that none of the permit holders at Paumalu have complied with all the conditions of their permits. Their permits have expired, and the sandbag structures have become de facto seawalls that are putting the future of the beach at risk.”

Aerial photography shows some homes teetering on sandy soil just above the beach, with large sand-filled tubes litter the beach below, according to state officials. Fabric curtains drape the slopes in front of some structures, all the way down to what remains of the public beach.

“It’s a real mess and the photographs clearly show it,” Cain said.

“Allowing these structures (erosion control devices) to remain endangers the public beach, limits access to them for much of the year, and is littering the near-shore marine and shoreline environment with debris. They are supposed to be temporary, to give the landowners time to plan for moving their houses and cesspools, which few have done.  There could be even greater environmental catastrophe if houses and their cesspools start falling into the ocean. This is a complicated and difficult situation to resolve,” Cain said.

The drone survey led to the creation of a document that details the permit history of each home, outlines the expired erosion control methods still in place, and any past or current enforcement actions.

“The current system of bringing enforcement actions to the Board of Land and Natural Resources, working our way through the process for contested cases requested by landowners on alleged violations, and then following up when cases are appealed in court, is slow and inefficient. Unfortunately, this process is the only enforcement tool OCCL currently has available,” Cain explained.