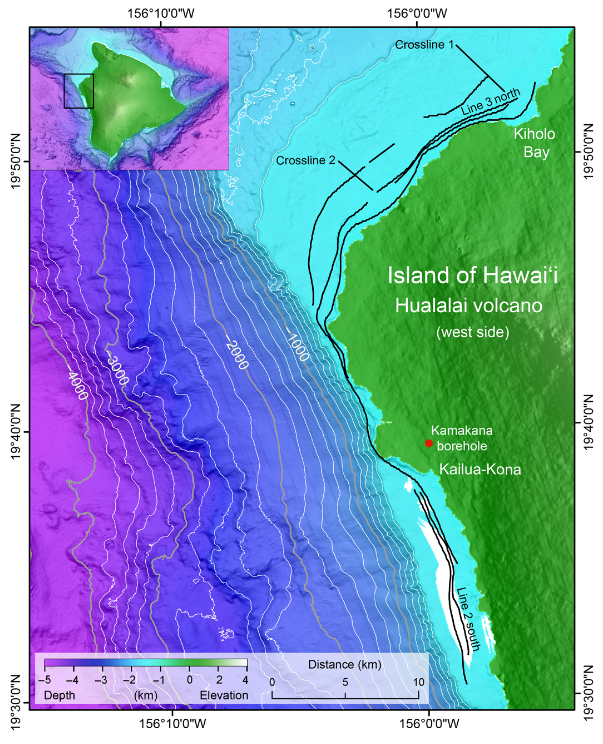 However, the onshore aquifer at the island of Hawai‘i exhibits a notable volumetric discrepancy between high-elevation freshwater recharge and coastal discharge. In this study, we present a novel transport mechanism of freshwater moving from onshore to offshore through a multilayer formation of water-saturated layered basalts with interbedded low-permeability layers of ash/soil. Marine electromagnetic imaging reveals ∼35 km of laterally continuous resistive layers that extend to at least 4 km from west of Hawai‘i’s coastline, containing about 3.5 km3 of freshened water. We propose that this newly found transport mechanism of fresh groundwater may be the governing mechanism in other volcanic islands. In such a scenario, volcanic islands worldwide can use these renewable offshore reservoirs, considered more resilient to climate change-driven droughts, as new water resources.

The global occurrence of vast offshore freshened groundwater reservoirs (1–3) may be used as a new resource to supply the increasing demand for water in the era of climate change–driven droughts (4, 5). Onshore aquifers are one of Hawai‘i’s most critical natural resources, providing the vast majority of water for drinking, irrigation, domestic, commercial, and industrial needs (6).