Hawaii & Alaska
Over the past week, the lava lake in Halema‘uma‘u has developed a subtle levee around its perimeter that allows the lake to be slightly perched above its base, like a mesa. A perched lava pond within Pu‘u ‘Ō‘ō crater. USGS photo by M. Patrick on Jan. 1, 2021. 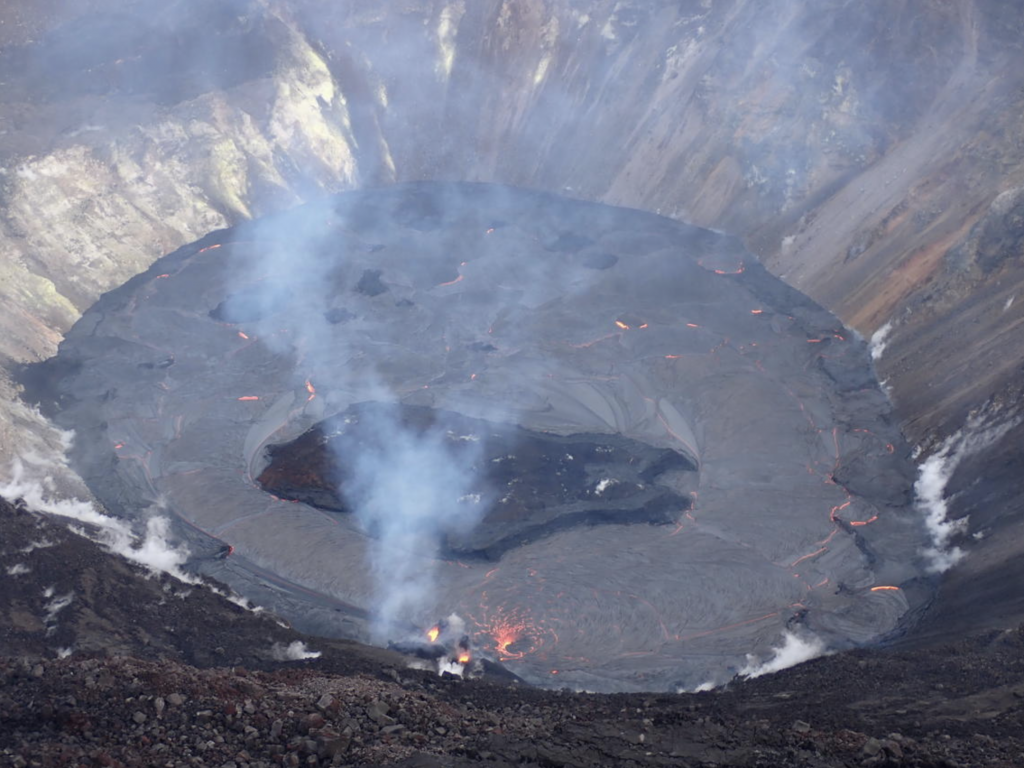 A seven acre island of solidified lava is floating in the lava lake at Halemaʻumaʻu crater on Hawaiʻi Island. The Hawaiian Volcano Observatory reports that the land mass continued to settle, mostly rotating counter-clockwise, in front of the west lava source that is filling the lake.

There are also 11 smaller islands that have been moving, but remained in the east end of the lake.

Yesterday afternoon, Jan. 4, the island was measured at 1-2 yards higher above the lake surface, according to an update provided by the HVO.

Lava activity at the Kīlauea Volcano on Hawaiʻi Island remains confined to Halemaʻumaʻu with lava erupting from vents on the northwest side of the crater. Monday afternoon, Jan. 4, the lava lake was 627 feet deep and spanned 82 acres.

“Summit tiltmeters recorded weak deflationary tilt since Jan. 1. Seismicity remained elevated but stable, with steady elevated tremor and a few minor earthquakes,” according to the HVO.

“Geodetic monitors indicate that the upper portion of the East Rift Zone (between the summit and Puʻu ʻŌʻō) contracted while the summit deflated at the onset of this eruption. There is no seismic or deformation data to indicate that additional magma is currently moving into either of Kīlauea’s rift zones,” according to the HVO report.

Near-real time webcam views of the lava lake can be found here: https://volcanoes.usgs.gov/volcanoes/kilauea/multimedia_webcams.html.