Hawaii & Alaska
via County of Kaua’i 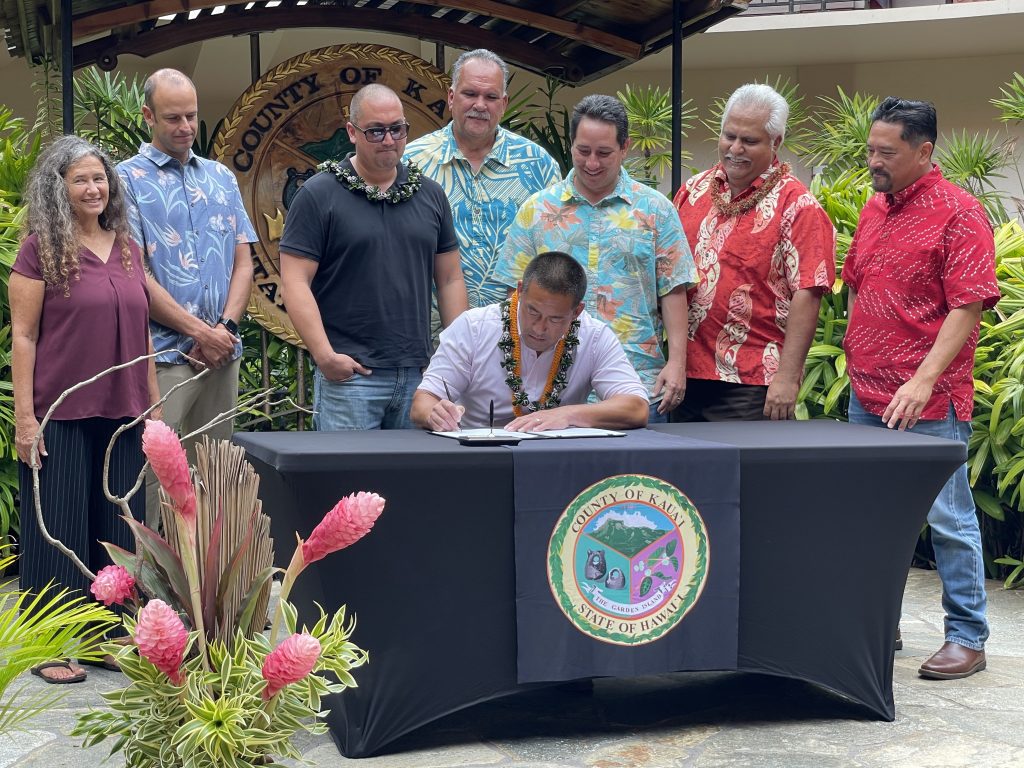 Kaua‘i became one of the first counties in the nation to enact proactive development regulations based on scientific modeling projections of sea level rise.

“Today is truly a historic day as I sign this bill into law,” Mayor Derek S. K. Kawakami said in a news release.

The Kauaʻi County Council unanimously approved the Bill, No. 2879, on Oct. 5.

The county’s Planning Department worked with the University of Hawai‘i at Mānoa’s Climate Resilience Collaborative on the progressive measure.

“Kaua‘i is no stranger to the impacts of climate change, as we’ve seen in the floods of 2018 and the recent historic south swell and king tides in July which resulted in significant infrastructure damage,” Maor Kawakami said. “This new ordinance ensures that the inevitable effects of coastal erosion and flooding are determining factors in the future growth and development of our island.”

A bill-signing ceremony was held Friday at the Līhu‘e Civic Center’s Mo‘ikeha Rotunda, with more than 25 representatives from various agencies and organizations involved in the creation and passing of the bill attending the event.

“I want to thank the Planning Department and its leadership for this first-of-its-kind landmark policy that will also help other municipalities as a model to better prepare for our future,” said Council Vice Chair Mason Chock, who also serves as chairperson for the Council’s Planning Committee. “Government is often known to be reactive, so it’s nice to see a proactive approach from Kaua‘i County.”

“Living on a small island in the middle of the Pacific Ocean, there’s no ignoring the threat of climate change on our natural and built environments,” said Ka‘āina Hull, the county planning director. “This bill is a result of years of hard work and collaboration and sets a new standard for planning policies which previously have been based solely on historical data and events. We’re incredibly grateful to all involved in this groundbreaking effort that will propel Kaua‘i toward a more secure and resilient future.”