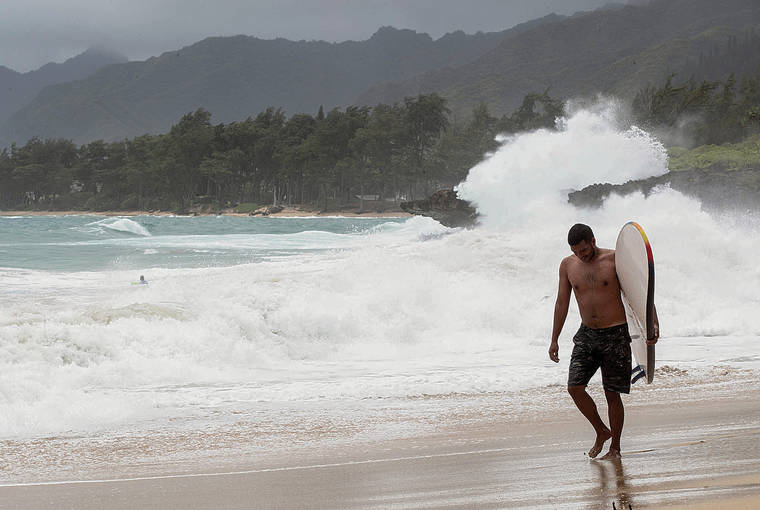 Instead, he finished the day by raising a glass to what appeared to be another near miss on Oahu.

“I went through Hurricane Iniki when I was pretty young. It was really bad. This would have been my second hurricane if it had hit,” De la Cruz said at about 5:15 p.m. as he watched waves roll in that weren’t any more impressive than a normal winter windup. “I thought it would be much worse than this. I’m kind of surprised.”

From the windward side of the North Shore to Haleiwa town, most businesses were closed. However, 7-Eleven and a few other businesses like the Turtle Bay Golf Shop, Fumi’s Kahuku Shrimp Truck and the Coffee Gallery in Haleiwa were open for at least parts of the day. Just like Hurricane Douglas, the Category 1 storm that threatened the state, people were all over the map on Oahu’s North Shore.

Some residents used the calm before the storm to hurriedly fill sandbags, board up windows and dig out streams. People rushed to pack cars to evacuate, but others, much to the frustration of government officials and emergency planners, planned to hunker down to wait it out.

The popular surf spot Pounders was filled with a few dozen locals trying to catch epic waves in the rising surf. A few got out of the water to rush home to secure their potted plants when the emergency sirens started sounding at about 11 a.m. Most people, however, remained unfazed.