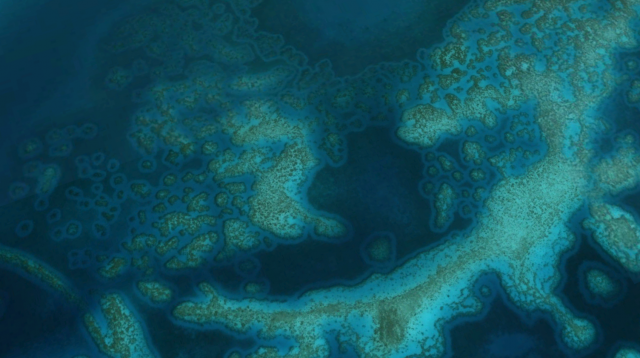 Researchers are learning more about how coral reef halos are formed, and that hold significant promise for conservation.

An extremely low-cost and accessible tool for conservation is on the horizon after decades of research into the natural phenomenon of coral reef halos, scientists say.

Jack Randall, the former senior ichthyologist at Bishop Museum in Honolulu, first wrote about coral reef halos over 50 years ago. Since then, Elizabeth Madin, a marine ecologist and assistant professor at the Hawaii Institute of Marine Biology, has become a leading expert in the field.

Her latest research would be a game-changer for reef managers in places where there are a plethora of reefs to monitor and fewer resources. Instead of spending time and money to send out dive teams down to count fish and examine the reef in person, they could glean much of the same information just by looking at satellite imagery — using the halos that appear in the photos as indicators for reef health.

Madin and her nine-member team at HIMB are working to understand more about how the halos are being formed, what the key components or drivers are that allow the halo to persist, and how the halos change over time.

An estimated 1 billion people benefit from coral reefs for food, coastal protection and income, according to the Environmental Protection Agency.

But in the last 30 years, scientists say more than half of the world’s reefs have succumbed to bleaching as the ocean’s temperature continues to warm and stress the coral. That’s part of the reason scientists are more keen than ever to monitor reef health worldwide.

Reef halos are believed to be formed by the interaction between predators and prey, says Zack Rago, a PhD student working at Madin’s lab who was featured in the Netflix documentary Chasing Coral. Herbivores like to graze close to the protection of the reef so they tend to stay around the same area. As a result, they eat all of the algae and leave behind the barren sand, forming a ring or halo around the reef that can be seen even from space.

Rago is currently researching whether the distance around the reef that is barren can change based on the number of predators in the water. Others in Madin’s lab are interested in topics such as the environmental factors that play a role in the reef halo formation, and how to measure and monitor the halos using satellites and how the dynamics change over a year or longer.

“There are halos as far back as you can go with satellite and aerial imagery,” Madin said. “We see halos that were there in the 1960s that are still there today in the exact same place.”

Although halos are resistant over the long term, she said they can change in size over the short term — which is where Rago’s work comes into play.