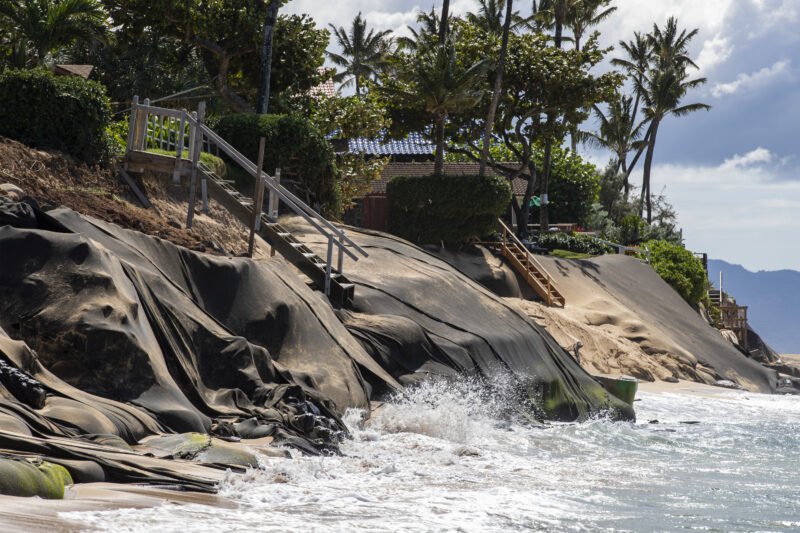 Hawaii’s beaches are public land, which officials are obligated to protect and preserve. But a state agency has repeatedly allowed homeowners, including surfer Kelly Slater, to use tactics that protect property while speeding up the loss of beaches.

For decades, homeowners in Punalu‘u watched from large picture windows as locals sunned on the beach and dove for octopus amid the coral reefs of northeast Oahu. But year after year, the ocean inched closer and closer to their wooden beach houses, and by 2006, it was threatening to claw them away.

Two homeowners asked the state for permission to erect mounds of sandbags along the beach for protection.

Hawaii’s Department of Land and Natural Resources agreed, with one key condition: The emergency measures would be temporary. Such shoreline structures can hasten beach erosion, and state officials were trying to ensure that didn’t happen. The homeowners had a few years to come up with long-term plans for their homes and remove the sandbags.

But as the deadlines approached, state officials granted them an extension. Then, another. The decisions set off a cascade of armoring along the coastline, as neighboring homeowners put up their own sandbags to guard against seasonal waves and rising seas.

Today, nearly 15 years later, the sandbags remain and the beach is largely gone. If members of the public want to reach the ocean, they must clamber over a makeshift seawall, covered by black and tan fabric and held together with rope, and past “No Trespassing” and “Danger” signs.