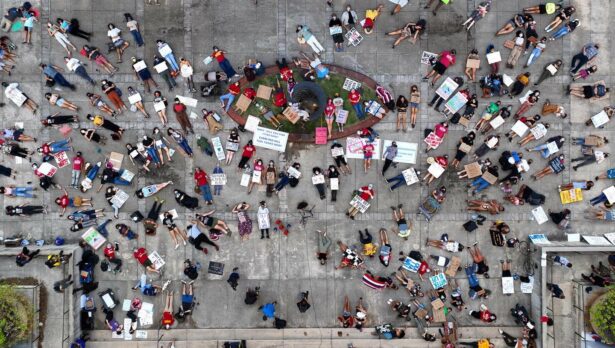 In the wake of a major leak by the Navy that contaminated O’ahu’s water supply, water protectors found unlikely allies among outraged military families.

Upwards of 100 water protectors rallied outside the Hawaii State Capitol in Honolulu on Dec. 10. Their greatest fears had just come true. The U.S. Navy had kept decaying fuel storage tanks just 100 feet above a water aquifer that functioned as the main source of drinking water on the island of O’ahu. Those tanks recently leaked jet fuel into the aquifer, poisoning thousands of people and creating irreparable damage to O’ahu’s water supply.

Shelley Muneoka, a Kanaka Maoli (Native Hawaiian) member of the O’ahu Water Protectors coalition of organizers and community members, has been warning of such a leak since 2014. She spoke about the surge in attention that water protectors have recently received from the larger O’ahu community.

“On the one hand, [we’re] really feeling devastated that it’s come to this and really scared for what this means for the future of life on O’ahu,” Muneoka said. “On the other hand, [we’re] really having to dig deep to activate and motivate. All of a sudden, every day, tons of things are happening.”

Public demonstrations and community outreach throughout Honolulu are being led by the O’ahu Water Protectors. The coalition has been growing support around a demand to “Shut Down Red Hill,” referring to the Red Hill Bulk Fuel Storage Facility, which is the official name of the complex of underground tanks.

So far they have held two high profile actions and are engaging with members of the local community through teach-ins and mutual aid in order to bolster local support for their demand. They have also been active on social media to draw public attention to the issue. Community support and attention from the public is especially necessary because the Navy has resisted demands and dodged accountability at every turn, even fighting a state order to defuel Red Hill issued on Dec. 6.

Concern first started growing over the tanks at Red Hill in 2014 because that is the first known case of a major leak. In January 2014, 27,000 gallons of fuel leaked from a single tank, prompting a 20-year agreement between the Environmental Protection Agency, the Navy, the Defense Logistics Agency, and the Hawaii Department of Health to study and consider improvements to the facility.

Despite this agreement between various governmental organizations, the Environmental Protection Agency and other departments responsible for holding the Navy accountable have not followed through, according to the Sierra Club.

The lack of action from federal and state institutions prompted the Sierra Club to wage a legal campaign that won some major gains in accountability. In 2017 the environmental organization sued the Hawaii Department of Health over a policy that exempted Red Hill from usual underground tank storage regulations. Prior to opposition, the Navy’s permit to operate the tanks was automatically renewed anytime it expired. The Sierra Club’s work forced the state to drop the practice of automatic renewal. The organization has also been using its website to document and clearly convey all available data and studies into the environmental threat posed by Red Hill.

Although the precedent of a major leak was set more than half a decade ago, the demand to shut down Red Hill lacked public support. Much of that hesitancy to question the Navy comes from the military’s large role in the Hawaiian economy and the concentration of service members and veterans who live on the island. The military industry is the second largest economic driver in Hawaii, employing 101,500 people or 16.5 percent of state’s workforce.