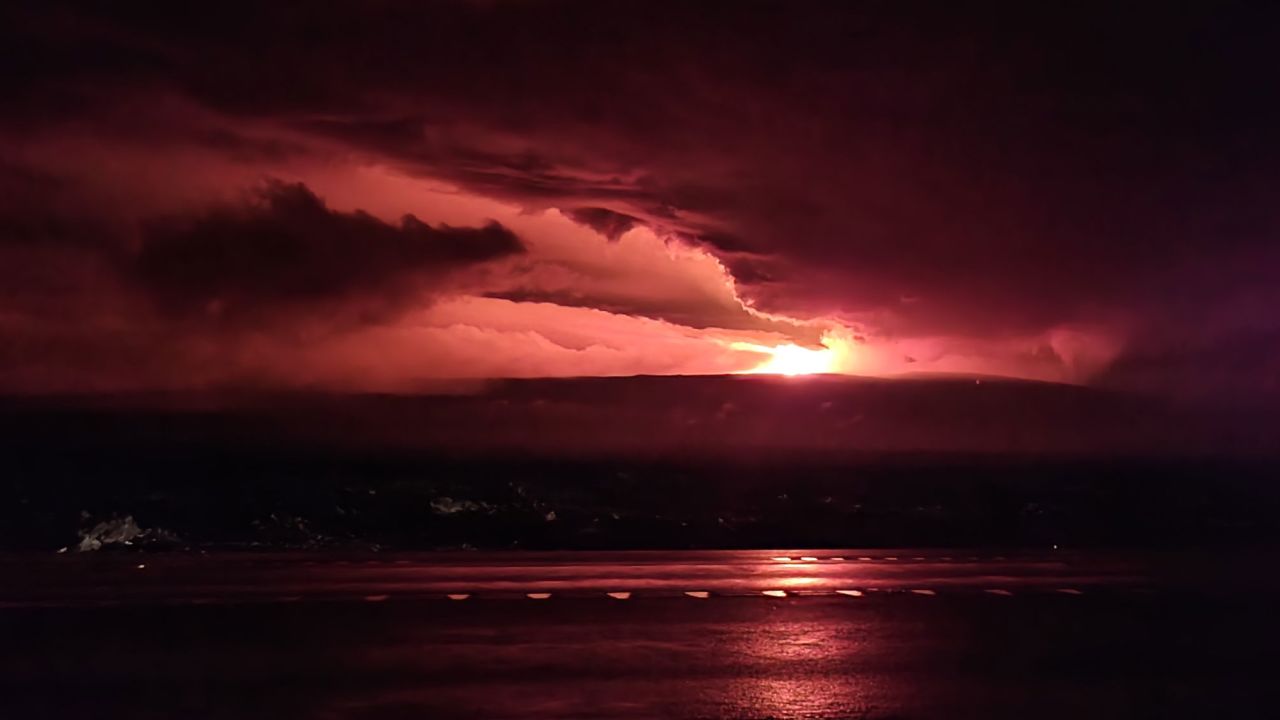 CNN — The world’s largest active volcano, Mauna Loa on Hawaii, is erupting for the first time in nearly 40 years.

Though lava is flowing down one side of the volcano, the eruption in Hawaii Volcanoes National Park is not threatening communities, the US Geological Survey said midday Monday.

“All indications are that the eruption will remain in the Northeast Rift Zone,” the agency said in an advisory, referring to an area where a volcano is splitting, allowing for lava flow. “Volcanic gas and possibly fine ash and Pele’s Hair (strands of lava glass) may be carried downwind.”

A “trace to less than one quarter inch” of ashfall could accumulate on parts of the island, the National Weather Service in Honolulu said.

“Passengers with flights to Hilo International Airport (ITO) or the Ellison Onizuka Kona International Airport at Keahole (KOA) should check with their airline prior to heading to the airport due to the volcanic activity at Mauna Loa,” according to an advisory by the state Transportation Department.

Southwest Airlines is not operating from Hilo International Monday because of the eruption, the airline announced. It has canceled five flights to and from Honolulu, Southwest said.

The US Federal Aviation Administration is “closely monitoring the volcanic eruption and will issue air traffic advisories once the size of the ash cloud is determined,” it said in a statement.

Reports of lava overflowing into the southwest portion of the volcano’s caldera, or crater, have come in to the Hawaii Volcano Observatory, the Hawaii Emergency Management Agency tweeted late Monday morning.

There is no indication of a threat to nearby communities, and no evacuation orders have been issued, the agency tweeted. As a precaution, two shelters have opened, even as “roughly half” of recorded Mauna Loa eruptions remained in the summit area without threatening populated areas, according to another agency tweet.

“People with respiratory illnesses should remain indoors to avoid inhaling the ash particles and anyone outside should cover their mouth and nose with a mask or cloth,” the Honolulu office warned. “Possible harm to crops and animals. Minor equipment and infrastructure damage. Reduced visibility. Widespread clean-up may be necessary.”

The observatory said earlier that lava flows do not threaten downslope communities.

At about 4,000 square miles, Hawaii, or the Big Island, is the largest in size of the Hawaiian chain but has a population of just over 200,000 people, according to the US Census Bureau, or fewer than 50 people per square mile. Most of the population is in cities and communities around the coast.

“Based on past events, the early stages of a Mauna Loa eruption can be very dynamic and the location and advance of lava flows can change rapidly,” the observatory said, adding, “If the eruption remains in Moku’āweoweo, lava flows will most likely be confined within the caldera walls.

“However, if the eruptive vents migrate outside its walls, lava flows may move rapidly downslope.”

Red hues from the eruption illuminated Monday’s predawn sky, according to footage captured at the Kailua Bay & Pier by Matthew Liano, a resident of Kailua-Kona, along the Big Island’s west coast.