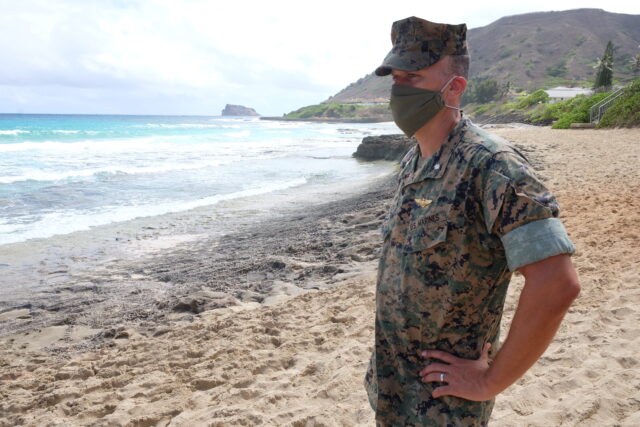 Green sea turtles are now nesting at a windward Oahu beach where the military trains.

In June, Hawaiian green sea turtle nests were discovered at Bellows Beach. It was the first time that they had been documented on the beach since the military began keeping track.

The Marines train to fight on land, sea and air. But as they do, they are often navigating ecosystems that are home to a diverse mix of animal and plant life.

Since the 1970s, federal legislation has called on the military to pay closer attention to the environmental impact of their training, and to manage the land in its possession. To that end the Marine Corps employs specialists that include biologists, arborists and pest control specialists.

“There’s a whole broad range of things that we do,” said Lt. Col. Timothy Pochop, the active duty officer that leads the Environmental Compliance and Protection Division.

Pochop spent most of his career as a helicopter pilot flying sometimes dangerous missions around the globe. But he got his current job because he’d studied zoology and environmental management in college.

“It’s not just about the legal obligation,” Pochop said of his duties. For him this posting is a dream job, giving him a rare opportunity to simultaneously fulfill his passions for both service in the Marine Corps and environmental protection and research.

They work to document and protect endangered species, control invasive species and identify and preserve archaeological and cultural sites around the areas where Marines train.

While Hawaiian green sea turtles at Bellows are the first of that species the Marines have recorded, they’re not the first turtles that Lance Bookless has seen nesting on Marine training grounds.

Bookless, the senior natural resources manager at MCBH, notes that in 2009 he got to watch a nest of Olive Ridley turtles hatch and make their way to the ocean. The Olive Ridleys are more commonly associated with the Gulf of Mexico.

Bookless said that in the 1970s, the base had a single employee whose job it was to look after both environmental and cultural resources.

“It was still a pretty new idea for the military,” he explained. In 1982 it became a two-person role and has slowly grown to a much larger team with varied specialties. “I think we’re up close to 30 people in our department,” said Bookless.