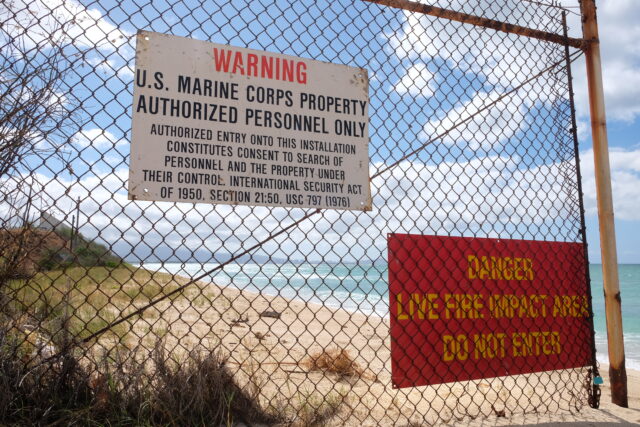 State officials have warned that a proposed seawall to protect the Marines’ Puuloa Range Training Facility would cause massive coastal erosion.

Sen. Mike Gabbard introduced a non-binding resolution to the Hawaii Senate on Thursday requesting that the Marine Corps complete an Environmental Impact Study on a proposed underground sea wall at its Puuloa Range Training Facility in Ewa Beach.

The “shoreline stabilization project” is intended to protect the rifle range from coastal erosion, but local residents and state officials have warned that it would protect the range while hastening the erosion of the beach itself.

The proposal would involve driving a “sheet pile” retaining wall 20 feet into the bedrock beneath. In 2019, Hawaii Office of Conservation and Coastal Lands administrator Sam Lemmo told Civil Beat the proposed project “represents another death knell to our beaches.”

But state officials have no power to stop it, and the Marine Corps has argued that it is not required to conduct an EIS. The military essentially answers to itself on proposed projects on federal land. Under the National Environmental Policy Act, the Marine Corps would follow its own regulations and can grant itself an exemption on an EIS.

The Marines produced a less formal environmental assessment in 2015 conducted by Naval Facilities Engineering Command on its behalf with a “finding of no significant impact” and opened a public comment period in 2019, but local officials and residents have criticized both for lacking transparency.