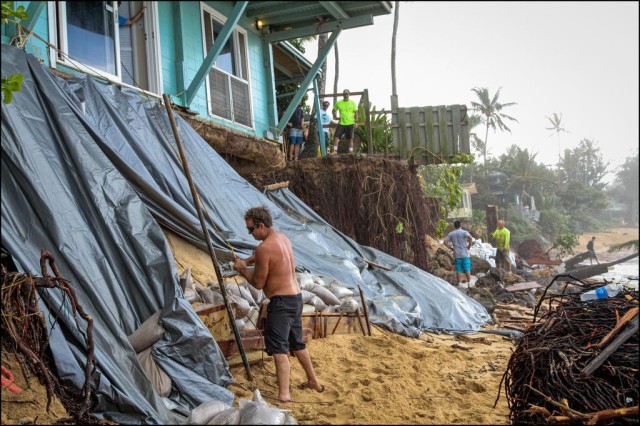 This week Hawaii became the first state to require real estate sellers to disclose to potential buyers if their property is threatened by sea level rise.

Years ago Maui real estate agent Keone Ball represented a homeowner in the sale of a property that showed up on the county tax map as the second lot back from the sea.

But when he showed up to view the Paukukalo property in person, the house didn’t look right. He walked around until he found the correct house nearby, ensconced directly on the oceanfront.

Puzzled, Ball asked the owner, “There’s supposed to be a house in between yours and the ocean, right?”

“Yeah,” the seller replied. “It’s been underwater for decades.”

As scientists warn of a merciless rise in sea level that could render more than 25,000 acres of statewide land uninhabitable this century, Hawaii home shoppers are gaining a new tool to help them analyze coastal hazards when exploring real estate.

On Monday, Hawaii became the first state to enact a law requiring real estate sellers to disclose in property transactions whether their land lies in an area susceptible to impacts from a projected 3.2-foot increase in sea level. Many real estate agents already warn prospective buyers about coastal climate hazards that could affect a property, but the new disclosure makes it mandatory and defines which properties are expected to be destroyed or damaged by sea level rise.

The 2017 Hawaii Sea Level Rise Vulnerability and Adaptation Report maps out this danger zone and concludes that rising seas threaten to generate $19 billion in property losses and displace 20,000 residents, possibly as soon as 2060.

But these dire predictions have so far done little to dampen a feverish demand for Hawaii coastal real estate. And many real estate agents doubt that the new disclosure will do much to change the behavior of home buyers and sellers amid other more visible market forces.