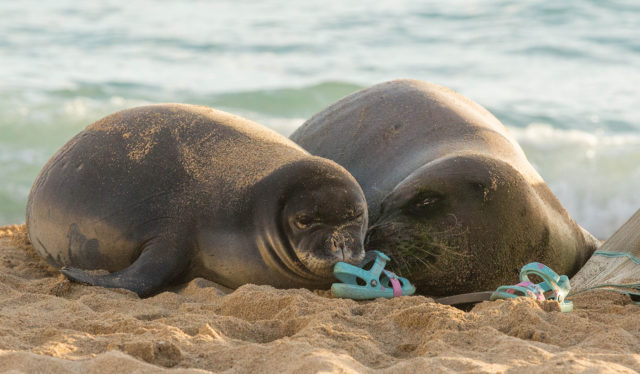 Most commenters are against the idea but commercial fishermen and Wespac are in favor.

Federal officials are weighing whether fishers should be allowed to shoot paintballs and fire sponge grenades at critically endangered Hawaiian monk seals to stop them from damaging their fishing gear, stealing their catch or compromising safety.

The National Marine Fisheries Service is in the process of reviewing more than 300 public comments — mostly in opposition — that it received last fall on its proposed rule. Congressmen, environmentalists, Oahu students, Native Hawaiians and others bristled at the idea.

U.S. Rep. Raul Grijalva, who chairs the House Committee on Natural Resources, said he thinks the guidelines will only heighten conflict between humans and wildlife, and that the effects of the National Oceanic and Atmospheric Administration’s proposed deterrents are poorly understood.

“In the face of climate change, fishing, pollution, and other human pressures, marine mammals deserve more protections – not the unnecessary assault and harassment proposed by NOAA,” he told NOAA.

Commercial fishers and the head of the Western Pacific Regional Fishery Management Council, which advises NOAA on how to manage 1.5 million square miles of ocean, support the proposed rule.