Hawaii & Alaska
A large portion of the Kaanapali Beach Resort walkway collapsed into the surf in October 2022, with ocean waves eating away at the sand from what was once a beach filled with sunbathing tourists. Image: Weatherboy 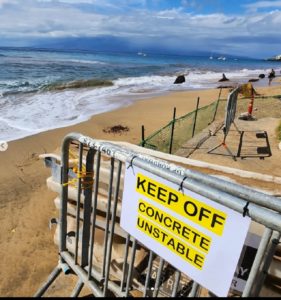 HI - Famous Maui Beach, Kaanapali, Disappears Due to Erosion; Some Call for Relocation of Resorts

One of the most popular and famous beaches in the United States, if not the world, is disappearing: Kaanapali Beach on the Hawaiian Island of Maui has been facing unprecedented beach erosion this year.

While local officials and property owners are scrambling on short-term plans, some are calling for the relocation of this resort community, which includes mega resort hotel complexes, away from the coast.

According to the Office of Conservation and Coastal Lands within the Department of Land and Natural Resources (DLNR)  for the State of Hawaii, Kaanapali Beach has been negatively impacted by chronic erosion and extreme seasonal erosion over the previous four decades. They warn that sand loss from the natural beach systems, or littoral cells, is expected to continue and likely accelerate over time.

The first master-planned resort in the State of Hawaii, Kaanapali was developed by American Factors, Inc. beginning in 1959. Located a couple miles north of the old whaling community of Lahaina, the one-mile stretch of beachfront property opened as the Kaanapali Resort in 1962.

Major resort hotels now on Kaanapali Beach (in order from the south end closest to Lahaina to the north end) are the Hyatt Regency Maui (opened in 1980), Maui Marriott (opened 1982 but has since turned into Marriott’s Maui Ocean Club),  Westin Maui Resort & Spa (originally opened as the Maui Surf in 1971, then rebuilt as the Westin 1987), Kaanapali Beach Hotel (1964), Sheraton Maui Resort & Spa (1963 but completely rebuilt in 1996), Royal Lahaina (1962), and Maui Kaanapali Villas (originally a Hilton when it opened in 1963 and sometime referred to as Hale Kaanapali. In addition to hotels, there are also luxury condominium towers, including the Alii, located between the Marriott and Westin properties, and The Whaler. The Whaler is next to Whalers Village shopping center, a popular beachfront commercial property with restaurants and stores.

When Kaanapali Beach  first opened in the 1960s, a wide sandy beach existed in front of the resort properties. But in recent years, especially this year, all of these properties became uncomfortably closer to the ocean, with the Alli condo complex now closest to the water’s edge.

The resort community featured a concrete sidewalk lined with lush landscaping, coconut palm trees, and other tropical foliage that strolled the beach resort from one end to the other, connecting the resort complexes to each other and the Whalers Village shopping area. The popular pedestrian walkway also provided access to the beach, with paths cut into the greenery above the sandy beach leading to the warm surf and nearby beach showers.

After a significant swell event in late September and early October,  the beachwalk had “KEEP OFF” signs and detour arrows up as chunks of it collapsed into the adjacent surf. Wide sandy beaches once covered with sunbathers went under water at high tide while the tropical foliage that once lined the sidewalk is submerged or washed away into the ocean.  With tropical foliage and the concrete sidewalk being eaten away by the angry surf, the ocean is getting perilously closer to the hotel and condo towers that line the resort.

But the erosion isn’t consistent. In the time since the most severe erosion occured earlier this autumn, surf has returned a large part of the beach, bringing sand in front of places like the Alii complex where little existed just months ago. But while sand shifts for the better there, sand continues to shift away from the south end of the resort, where the ocean is eating into the Hyatt resort’s beachfront.