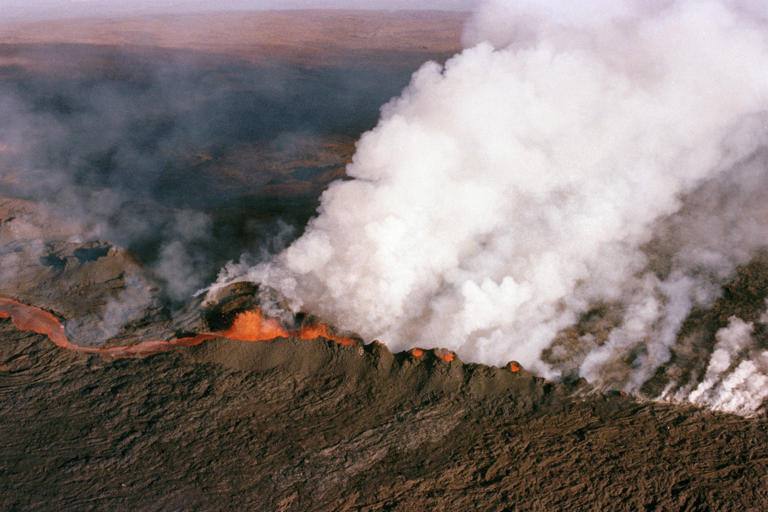 HI - EXPLAINER: Where will Hawaii's biggest volcano erupt from?

HONOLULU (AP) — The ground is shaking and swelling at Mauna Loa, the largest active volcano in the world, indicating that it could erupt.

Scientists say they don’t expect that to happen right away but officials on the Big Island of Hawaii are telling residents to be prepared in case it does erupt soon. Here’s are some things to know about the volcano.

Mauna Loa is one of five volcanoes that together make up the Big Island of Hawaii, which is the southernmost island in the Hawaiian archipelago. It’s not the tallest (that title goes to Mauna Kea) but it’s the largest and makes up about half of the island’s land mass.

It sits immediately north of Kilauea volcano, which is currently erupting from its summit crater. Kilauea is well-known for a 2018 eruption that destroyed 700 homes and sent rivers of lava spreading across farms and into the ocean.

The Big Island is mostly rural and is home to cattle ranches, coffee farms and beach resorts. It’s about 200 miles (320 kilometers) south of Hawaii’s most populous island, Oahu, where the state capital Honolulu and beach resort Waikiki are both located.

Mauna Loa’s eruptions differ from Kilauea’s in part because it is taller. It’s greater height gives it steeper slopes, which allow lava to rush down its hillsides faster than Kilauea’s.

It’s enormous size may allow it to store more magma, leading to larger lava flows when an eruption occurs.

Frank Trusdell, research geologist at the Hawaiian Volcano Observatory, which is part of the U.S. Geological Survey, said data indicates that Mauna Loa has a much larger magma reservoir than Kilauea, which may allow it to hold more lava and rest longer between eruptions than Kilauea.

WHERE WILL MAUNA LOA ERUPT FROM?

Scientists won’t know until the eruption begins. Each eruption since 1843 started at the summit. Half the time, the volcano later also began erupting from vents at lower elevations. The other half of the time it only erupted in the summit caldera.

Scientists can’t tell far in advance when and where Mauna Loa will open new vents and erupt.

Vents generally form along the volcano’s rift zone. That’s where the mountain is splitting apart, the rock is cracked and relatively weak and it’s easier for magma to emerge.

An eruption from vents on the southwest rift zone could hit residential communities, coffee farms or coastal villages on the west side of the island. Lava could reach homes in just hours or days.