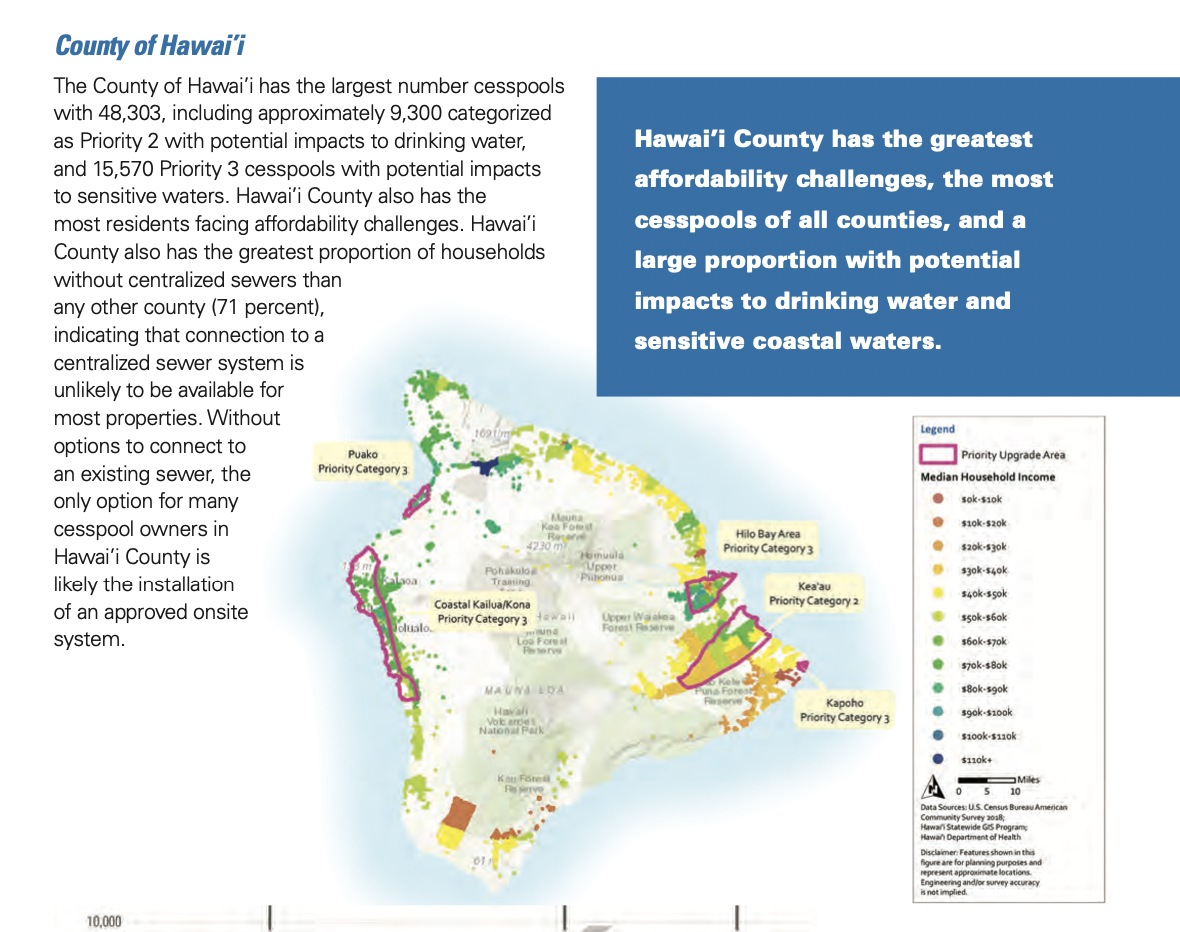 HI - Experts say cesspool conversion too costly for most

Most Hawaii residents will be “financially burdened” with cesspool upgrade requirements, even as members of a task force urge the state to move up the deadline from 2050 to 2030 to convert cesspools in the most crucial areas.

About 22 percent of households in Maui County have cesspools, and about 98 percent of Maui residents and 100 percent of Molokai residents cannot afford the conversions based on average annual income, said Cari Ishida of Carollo Engineers.

Hawaii County would have the greatest affordability challenges — it has the most cesspools of all the counties, but the least access to centralized sewers. In Kauai County, 54 percent of households have cesspools and 95 percent would not be able to afford the conversions.

Oahu is the most affluent, but has significant poverty, Ishida added.

Still, Ted Bohlen, a Cesspool Conversion Working Group member and former deputy attorney general, said “if we wait until 2050, we aren’t going to get the job done and we need to do the job.”

“Pollution threatens all the reefs in Hawaii and fresh water by 2050, and we depend on our water for our shoreline, for our economy, for our way of life in Hawaii,” he added. “So it’s very important that we undertake this process of upgrading cesspools now.”

That’s why the team of state and county professionals studied the issue for four years and shared their findings during a joint meeting Wednesday of the House Committee on Energy & Environmental Protection and the Senate Committee on Agriculture & Environment.

Hawaii has more than 80,000 cesspools that release more than 50 million gallons of raw sewage into the groundwater and surface waters every day statewide, according to the Legislature. In 2017, lawmakers passed Act 125 requiring that all cesspools be converted by 2050.

Act 132 the following year established the Cesspool Conversion Working Group, tasked with researching technology options, collecting data and studying finances, as well as developing a long-range, comprehensive plan for the conversion of all cesspools statewide by 2050.