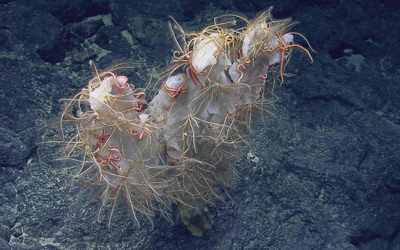 The team of NOAA, Ocean Exploration Trust, researchers and partners returned from the voyage on Dec. 6. What they encountered during the course of their work blew them away.

“The sheer size and density of some of these ancient sponges boggles my mind. This expedition shows me what a treasure we have in the monument,” said Dr. Christopher Kelley, retired University of Hawai’i researcher and one of the leaders of the expedition. “In my 21 years exploring the deep-sea environment of Hawai’i, and well over 100 submersible and ROV dives in the archipelago, the communities on these seamounts have to rank as some of the best I have seen.”

The research team reported their findings in a press release issued Monday, Dec. 13.

“We had a good idea that these seamounts would host thriving coral communities but what we saw in some of these areas, and the sheer density and diversity was amazing,” Auscavitch said. “What is most exciting is the number of similar and different species in the monument compared to other areas of the central Pacific. The results of this cruise highlights the uniqueness of each seamount in Papahānaumokuākea that remains to be uncovered.”

The expedition of scientists, mapping specialists, educators, and a Hawaiian language expert conducted 13 remotely operated vehicle (ROV) dives at depths from 3,000 to 9,600 feet on the Voyager Seamounts south of Kapou (Lisianski Island).

“The Ocean Exploration Trust assembled a fantastic team for this expedition. When analyses of our video and scientific collections are completed, I believe the Voyager Seamounts will be viewed as gems of Papahānaumokuākea Marine National Monument, well deserving of special protection and further study,” Expedition Leader Dr. Emil Petruncio, Ocean Exploration Trust, said.