Hawaii & Alaska
Matson has one of the worst performances of all major shippers complying with voluntary speed limits to protect whales off the California coast. Cory Lum/Civil Beat/2022 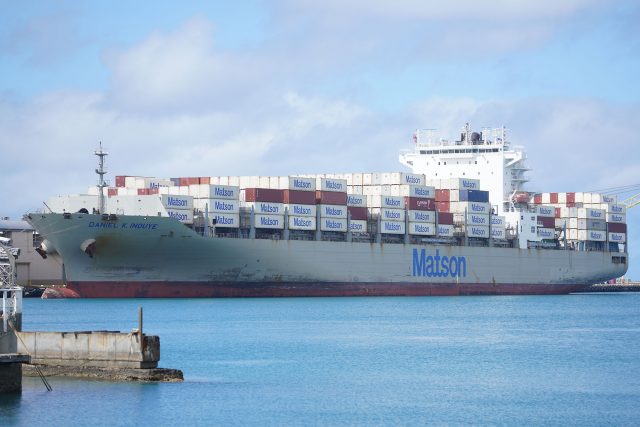 Matson and Pasha Hawaii are ignoring calls to slow down. But other major shippers have heeded requests to protect endangered whales.

In recent years, some of the world’s biggest maritime companies have made an effort to slow down in the crowded shipping lanes off the California coast as their vessels access busy ports in Long Beach and the San Francisco Bay.

Those speed reductions are crucial, federal wildlife officials and conservationists say, to help stop the collisions that kill dozens of endangered blue, fin and humpback whales in that area every year. Those whale strikes must be curbed significantly if those species are to recover, they say.

However, Matson and Pasha Hawaii – the two primary shippers that carry consumer goods, food and other supplies to Hawaii from the West Coast – have failed to make any meaningful change in their speeds while passing through those sensitive zones, data obtained by Civil Beat shows.

The data shows Matson and Pasha are exceeding the federally recommended speed of 10 knots or less during whale season in the waters off Southern California and San Francisco about 80% of the time, frequently running at speeds faster than 15 knots through the sensitive zones.

Further, Matson, the larger of the two Hawaii shippers, has “consistently ignored” calls to slow down to 10 knots or less during whale season, researchers based on the U.S. mainland say.

An analysis of thousands of vessel speed records shows that Matson and Pasha have two of the worst records by far when it comes to complying with the voluntary 10-knot speed limit outside those California ports, where the whales migrate each year to feed.

Only one other maritime company, a ferry service called the Catalina Express, had a poorer compliance record over the past five years, the vessel data shows.

The Hawaii shippers’ track record prompted Whale Safe, a group led by scientists that provides real-time data on whales’ presence and tracks how well maritime companies comply with the recommended speed limit, to give those companies failing grades.